CAN’T MAKE THIS STUFF UP!

I am writing this from Ljubljana, Slovenia. I’ll explain, or try. It’s been a little crazy the past few weeks.

The dogs and I packed up Alice in early September and headed out on a roundabout trip to take Alice to Santa Barbara to be fixed.

Our first stop was 4 days in Park City to see my friends and celebrate Shawna’s 40th birthday. Oh, to be young again! It was a great visit. Saturday morning, 5 of us drove to Snowbird to “run” the Snowbird Cirque Series race. It is basically one big ass hill climb. Grant and I stuck together (or I should say Grant kindly stuck with me!), which was really fun. I actually felt pretty good out there, though I paid for that later. Shawna finished well ahead of us, making the podium in her new master’s category! No small feat in a large talented field of runners. 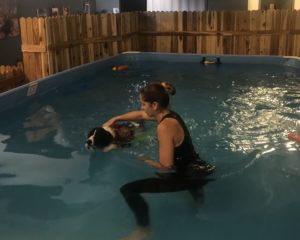 After the run I picked up the dogs from daycare and took them to a dog swim place. I have been wanting to teach Zoey to swim and I also thought it might tire them out a bit. Let’s just say that Zoey is not a natural swimmer! It was pretty comical as she tried to swim herself up out of the water! She got better but we have some work to do.

That night was the 80s birthday bash. The old fart (that’s me) made it a couple hours, saw some old friends, and then snuck out back to the dogs who were waiting patiently in the truck.

Monday morning (my birthday!) I woke up with a swollen throat, swollen lymph nodes, lots of snot, generally feeling like crap. Happy Birthday to me, right?! I rallied to take the dogs out for a very short bike ride in the mud and then we packed up and headed on to St. George, our first stop on our way to Santa Barbara. I was sick and cranky and generally not having a good birthday. Boo hoo me. My original plan had been to get out with the dogs each morning before continuing our journey. Ha. That plan quickly went to hell.

It was still quite hot in St. George, so at 3:30 the next morning we packed up and just left. We had to make it to Santa Barbara area that day. Sick, cranky Mom and an unexercised puppy = long day. To be fair, Zoey was being a really good girl, but she is still a puppy. I think I had a glimpse of what Grandma and Grandpa used to put up with when they took my sister and I on long road trips!

All would be nice and quiet for an hour and then I would hear chewing. It was hard for me to see WHAT Zoey was chewing, sometimes it was one of her chew toys and sometimes it was part of the truck. At other times she would sneak on to Puck’s side of the truck and he would be cranky and growl at her. Soon “NO ZOEY!!” and “PUCK, BE NICE TO YOUR SISTER!!!” became my mantra. Sometimes it was “GODDAMMMITTT NOOOOO ZOOOOOEEEEEEY!” and “PUUUUUUUCCCCKKK!). Fun times in the K-W mobile.

We stayed in a lovely spot on Lake Casitas just outside of Santa Barbara that night. It was beautiful and cool and near Ojai (good coffee shop). My mood improved a bit. The next morning, I took the dogs out for an early morning hike. As we were driving to coffee after the hike, I wondered why it smelled like asphalt in the truck. I looked back and there was tar everywhere! Puck and Zoey had found a tar pit and their paws were coated in the stuff. My well-organized day quickly went to hell. Not knowing what to do I bought some dog shampoo and spent 30 minutes trying to make a dent in their tar-paws. It was hopeless. I started calling groomers begging for help. One groomer agreed to take them. We quickly packed up, drove Alice down to drop her off and then raced over to the groomers. Four hours and a whole lot of Dawn dish detergent and scrubbing later the dogs were tar free. Holy cow. Who knew there were random tar pits there? Everyone but me, apparently.

The next morning it was a 3:30 wakeup call again because we needed to make it through Los Angeles before morning traffic. We did, barely. After that it was smooth sailing, but after two long days of driving we were really glad to be back in Fruita. Glad until I walked into the house with two hot tired dogs and turned on the water faucet to give them some water to find my water had been turned off. The actual water company had been sending bills to the wrong address and I didn’t realize this because the water bill I thought I had been paying was for the irrigation water not the potable water! I paid my bill and within a couple hours it was all resolved, but by this time I was ready to guzzle a bottle of wine.

We made it back to CB that Sunday – I was still quite sick and crabby, but happy to be home… for a bit.

Sleeping on the bed helps… a little.

Tuesday, I took Zoey in to have her spayed. She was in a lot of pain that night so none of us slept. Did I mention I was still sick and crabby? The next day she was still in a lot of pain but by that evening she seemed a little better. By Thursday she was improving, but still had to be in the cone constantly. Thursday evening, I left two sleeping dogs to go have dinner with Alexis. Puck was exhausted from 3 days of day care and Zoey was drugged. I thought about taking them with me, but they were so peaceful. What could go wrong?

A couple hours later I pulled up to the house and noticed a strange shadow by the front door. As I entered the door and flipped on the light, I realized that shadow was Puck, standing by the front door, panicked and panting, WEARING the metal dog gate that had been securely in place at the top of the stairs. I honestly don’t know how he managed this. Apparently he was so scared of Zoey and her cone (to be fair, she was a little crazy and I’m sure seemed like an alien) that he must have bolted into the gate with enough force to get his entire front body through a narrow, maybe 5 or 6 inch opening between metal bars. He then managed to wrench the entire gate off and drag it, now firmly around his ribs, down the stairs. It is amazing he was not seriously hurt. In hindsight I wish I had taken a picture, but I was so desperate to free him from the gate that it never crossed my mind. I wasn’t sure I was going to be able to pry the gate off him and was thinking I might have to call for help. But slowly I was able to work it back over his ribs. Poor Puck: This a 90 pound dog with a huge chest we are talking about. Unbelievable.

Zoey, through all of this, was cowering under my desk upstairs because she did not understand why her beloved brother was acting like she was the devil. I finally had to put Puck in his crate because it was the only safe place where he would not panic. There was a lot of dog comforting going on that night!

Puck spent the next few days with Carrie Jo and Bandit and family, until Zoey was able to not be in the cone anymore.

A few days later I packed up, left the animals with the dog/house sitter and headed to Denver to start my next adventure: Vermont for the Vermont 50 and to visit my friends and then on to Slovenia and Croatia. We’ll save that for next time, as I suspect I am becoming more rambling and incoherent by now! More than usual at least!

It is still pouring rain here, but we are all exhausted from travel, so it is a good day for it.