Not sure why I haven’t been motivated to write, because I really enjoy writing this blog. It’s my own personal journal and therapy in one. If you read it, thank you, I hope it makes you laugh sometimes!

I think the past year’s emotional rollercoaster finally caught up with me and I was just in a bit of a funk. I’m doing well, just had to get through that funk. So here I am. I’ll do a lightning round to catch you up since my last post. I have to consult my calendar to even remember half of it! Here are the highlights:

I had an early morning flight – the only one to New Orleans from Denver on that day. I had so much time as I headed to the airport that I decided to stop and top off the tire that my car was telling me was a few PSI down. It was really cold, which makes them read lower, but since it was just the one tire, I figured it was probably a little low normally anyhow. I stopped at a gas station with an air machine, put my quarters in and started to fill the tire. 20 minutes and many quarters later all I had succeeded in doing was to let the air OUT of the tire. I think maybe it was so cold that the air nozzle was frozen. Now my tire was at 13 psi and I was starting to be a little stressed. I drove to 3 more air machines nearby – slowly – and they were all out of order. Panic was setting in, but there was a Park n Ride for the airport train a couple blocks away so I decided I would just park, take the train, and worry about the tire after Thanksgiving. I limped to the Park n Ride to discover it was completely full. Of course. On to full scale panic. I decided I could drive very (very) slowly to the next Park n Ride on I-70 and maybe find a gas station along the way. As I merged onto I-70 going 20 mph, I came to an immediate stop behind a significant wreck and the resulting back up. Oh boy.

As I inched forward, counting the minutes I had to make it to the airport, I remembered (duh!) that I had a damn air compressor in the car! Tesla doesn’t give you a spare tire, instead you have a tire goop / filler machine. I’d never used it, so in the middle of traffic I jumped out and got it out of the trunk. As we continued to inch forward, I figured out how it worked. This was good, now I just had to find a place to pull over. I did and hooked up the air compressor. It is tiny, so it is not fast, and as I watched the pressure slowly inflate, I was willing it to go faster. I could not miss this plane! 10 minutes later I was racing to the airport, thanking whatever lucky stars had convinced me to pack a carry on vs. a checked bag. I ran through the airport, luckily breezed through security, and was at my plane right before it started boarding.

We sisters had a wonderful time in New Orleans, eating, drinking and exploring. It was such a gift for me to be able to spend that weekend with them. My travel home was easy. I took the car immediately to a tire shop to have them check to make sure I hadn’t damaged the tire or rim (I hadn’t). Then it was back to Crested Butte with only one dog. Before Thanksgiving I had dropped Zoey off with a wonderful trainer for a four-week training course that would hopefully make her easier for me to handle during surgery!

December was relatively uneventful, or I’ve forgotten anything that happened! The best part of the month was when my sister and nephew came out right after Christmas to ski/snowboard. Max, my nephew, was so excited about snowboarding on a real mountain (they live in Minnesota) and he did great. We had so much fun! Max really wanted me and Morgan to try to “get some air”. I declined, thank you very much. I think Morgan managed a few inches.

Puck had to have surgery to remove a cyst that was between his toes. Luckily it was a cyst and not melanoma, which apparently dogs can get between their toes. I had convinced myself that, with my luck, it was probably melanoma, so was very relieved when the test came back that it was just a cyst. For two weeks I had to tape a Ziploc baggie on his leg and put a bootie over it so that he wouldn’t get his bandage wet. He was very tolerant but lost a lot of hair to my tape jobs.

Puck recovered just in time for me to go to Belize! On our way to Denver, we stopped through Colorado Springs so Zoey could have her CT scan for her upcoming surgery. Then I dropped both dogs off with Susan (that’s my wonderful trainer, who I am eternally grateful for these days). They would spend the week with her while I went to Belize with Morgan and Cecilie. 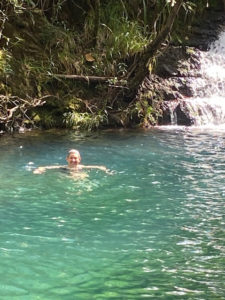 A dip in a hidden pool!

Belize was beautiful and relaxing. After quite a bumpy drive – they are very fond of huge traffic humps seemingly every mile, and our final 20 miles was on a dirt road that would make most Montana ranch roads look like superhighways – we arrived at Hidden Valley Inn, in the middle of a mountain preserve. It was completely isolated and beautiful. We spent 3 nights there and were the only guests for one of those nights! We hiked both days through lush rainforest and spent time swimming in (cold) hidden pools under waterfalls. It was spectacular! After that we headed to Placencia and the beach. We stayed at NAIA resort and it was amazing. We had private plunge pools in our villas and were right on the beach. The food was excellent. The spa was relaxing. I paddle-boarded a couple days in the calm water, and we did a little kayaking too. But mostly we relaxed, which is probably exactly what we all needed.

I’d never been to Belize, of course, and really didn’t have it on my radar screen. But it is a beautiful country and not overrun with tourists (yet).

I flew back to Denver on February 2 and it was thankfully almost 70 degrees in Denver because I was still in sandals! On February 3, that changed and the high was somewhere closer to 20. It was hard to come back to the cold! I picked Zoey up that day and we headed down to Colorado Springs for her surgery. Puck stayed with Susan and has been there the past 3 weeks so I can focus on Zoey’s recovery.

The surgery was long and complicated because our surgeon wasn’t 100% sure what he was going to find in there. They had done physical and computer models of her leg and that helped them with planning, but it was still almost a 3-hour surgery. At about the 2-hour mark, when I still hadn’t heard, I began to think something had gone wrong. At 2.5 hours I finally called in a panic and they assured me all was going well. Zoey had not died from anesthesia or any of the other awful scenarios I had going through my head. The surgeon was happy with the surgery, but we won’t know until she is fully healed if it did what it needed to do. 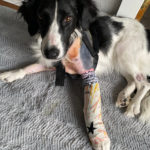 And when the drugs wore off!

My life right now is basically focused on dog rehab and recovery. Not to mention trying to keep Zoey calm. They cut her bone and put in a plate to hold her bones together while they heal, so she isn’t supposed to jump, go down-stairs, play, etc. Try telling this to a 1-year old Border Collie puppy. I, for one, am getting extra exercise carrying her up and down all the stairs. She is limited to 10-minute slow walks, which we do multiple times a day. We have started rehab, so I am going back and forth to Denver every other week to do that.

Zoey has lots of extra gear now, including a Tail Wagon with ski attachment and a jogging stroller. I do receive strange looks when people realize I have a dog and not a kid, but it has allowed me to get her out in the fresh air and it actually tires her out a little because she is up and watching the world go by! 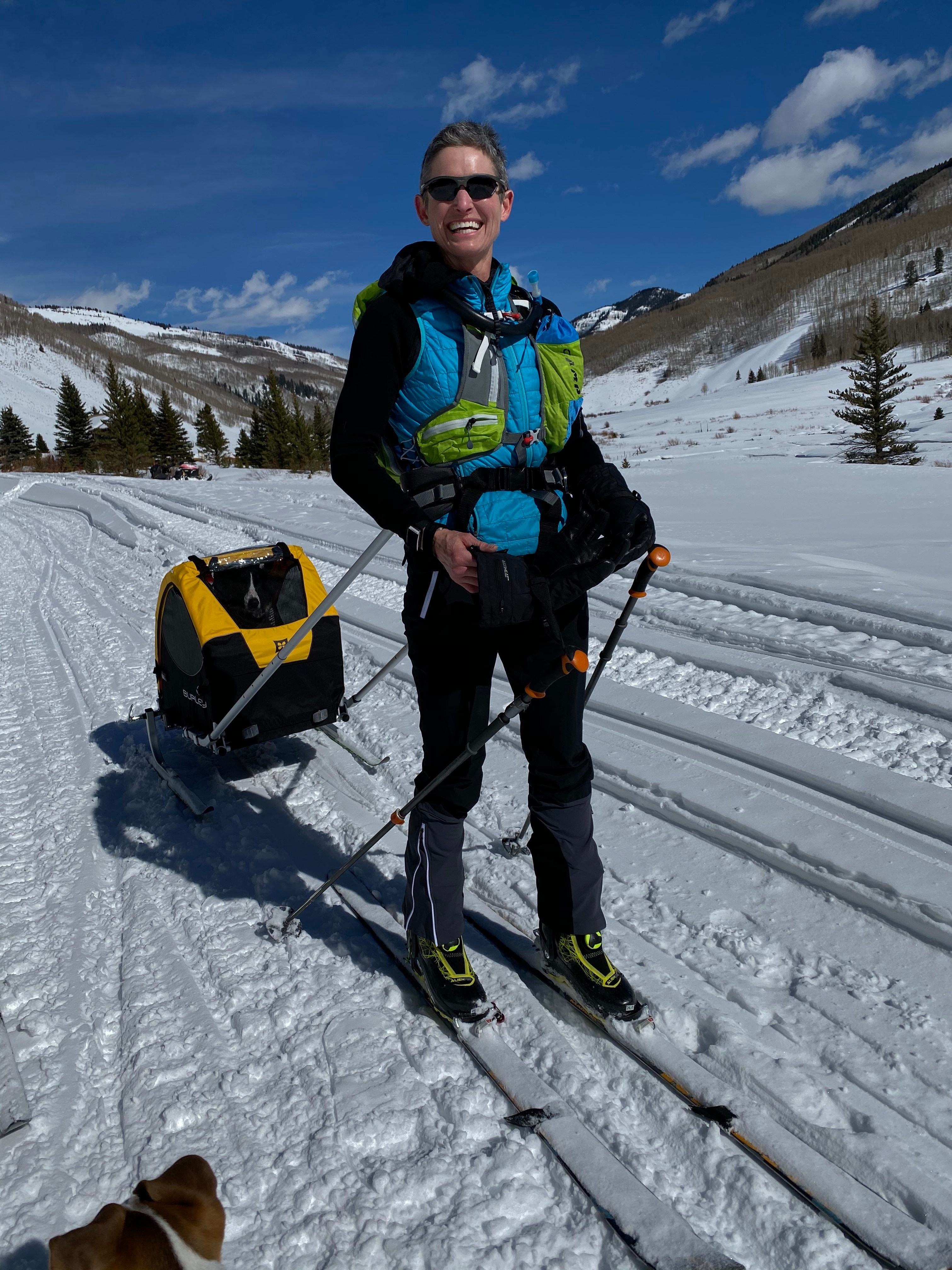 I’ll stop now and try to get back on track with the blog, so you don’t have to suffer through major data dumps like this one anymore.

Happy March everyone! I, for one, am ready for spring.