It has been a busy, wonderful week. Last weekend, on a day when I was feeling a little low, my friend Amy came up with a plan to fly up this week to visit, an early birthday present. It was the best birthday present I could have asked for!

Luckily Amy is tough, because she lives at sea level now, but I completely disregarded this when I planned what we would do during her stay.

She got in Tuesday night. Wednesday, we drove up to Lake Irwin to hike up Scarp’s Ridge. I forgot to bring Puck’s water pack, so I did not think we would make it all the way up. But we were in luck (some would argue that point). About a mile up, we met a nice couple with three dogs, on their way down. They had spare dog water which they gave to Puck and Zoey. Further up the trail we crossed a very small trickle of a stream. It was enough, Puck even figured out how to lie down in it. At that point we decided we had to go to the top. 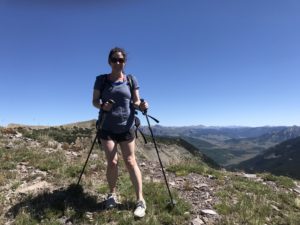 By the time we got back down to the lake we were all hot and tired and ready to be IN the lake. The fishermen were not all that happy with us, but it sure felt good.

We drove back home and found the new pack I had rush ordered for Zoey waiting on the doorstep. The company – K9 Sport Sack – just came out with a pack to carry larger dogs (up to 80 pounds! I told Puck not to hold his breath). This was my perfect solution to be able to take Zoey on longer hikes while she is still a puppy. We decided we should test it out in the house, so we loaded Zoey in it without much trouble. Apparently, she was so tired she couldn’t put up much resistance. I put it on my back, jogged around the kitchen twice and declared it ready for the big time. I was even able load my hydration pack in it so I would have plenty of water. Perfect!

We had big plans for Thursday. We were meeting my friend Alexis and her friend Krista at the West Maroon trailhead early in the morning. We had such a huge snow year this year that the access road is impassable because of the remaining snow. Alexis and Krista planned to bike the 3-4 miles up the road to the trailhead. Amy and I decided we would give ourselves a head start and hike it.

My strategy was to load Zoey up early to make sure this was going to work. I let her run off some energy first but then it was time. She was a tiny bit more resistant, but after some struggling in the dirt, Amy and I managed to load her in the backpack. Once Zoey was in, she seemed quite content. As long as she could see Puck, she was ok. I carried her for a couple miles to the trailhead and was thrilled with how well this system was working.

Alexis and Krista showed up a few minutes after we got there; we stashed their bikes and headed up the trail. I let Zoey run for a mile or so again before loading her back in the pack. I figured it was safer for both of us if I carried her uphill vs. down, so I wanted to make sure she had the miles left in her little legs to get back! I took the lead and the pace was extremely slow, but no one complained. We were all just so happy to be out on a beautiful day. We decided to head up Hasley Pass instead of West Maroon. All three of my hiking buddies offered to carry Zoey but I felt like I couldn’t ask them to do that. At one point, they looked over and Zoey was fast asleep on my shoulder. Priceless! 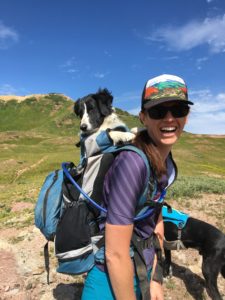 When we were maybe ½ mile from the top I stopped and sat down and said I wasn’t sure I could make it the rest of the way. That maybe they should go on and I would wait. Alexis, used to dealing with a 3-year-old, looked at me and gave me a choice: We could either all turn around or I could give her Zoey and she would carry her to the top! Wisely, I handed Zoey over and we continued on. The views were spectacular, and I was glad she had given me an ultimatum to get us there!

After snacks for everyone, Puck & Zoey included, we headed back down. By the time we reached the road, I am not sure which of us was more tired! Alexis and Krista got back on their bikes and headed up the hill to the top of the pass and home. Puck found a bush and collapsed while Amy & I loaded Zoey back in the pack for the final hike back to the car. 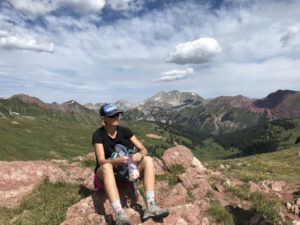 All told we hiked 14 miles that day. We wisely decided that Friday was going to be an easy day! We did an easy hike and then had eggs benedict at Paradise Café. We drank lots of coffee. We walked around town, did a little shopping, started a jigsaw puzzle, ate cheese and crackers for dinner. A perfect finish to a great visit.

Amy flew home Saturday. I was sad to see her go, but I felt so lucky to have had 3 wonderful days with her.

The flying circus will be back on the road for a short trip later this week. First to Park City for Shawna’s 40th birthday bash, then on to California to drop Alice off for repairs. I’ll keep you posted!