Dogs, mud and laughter: so good for the soul. 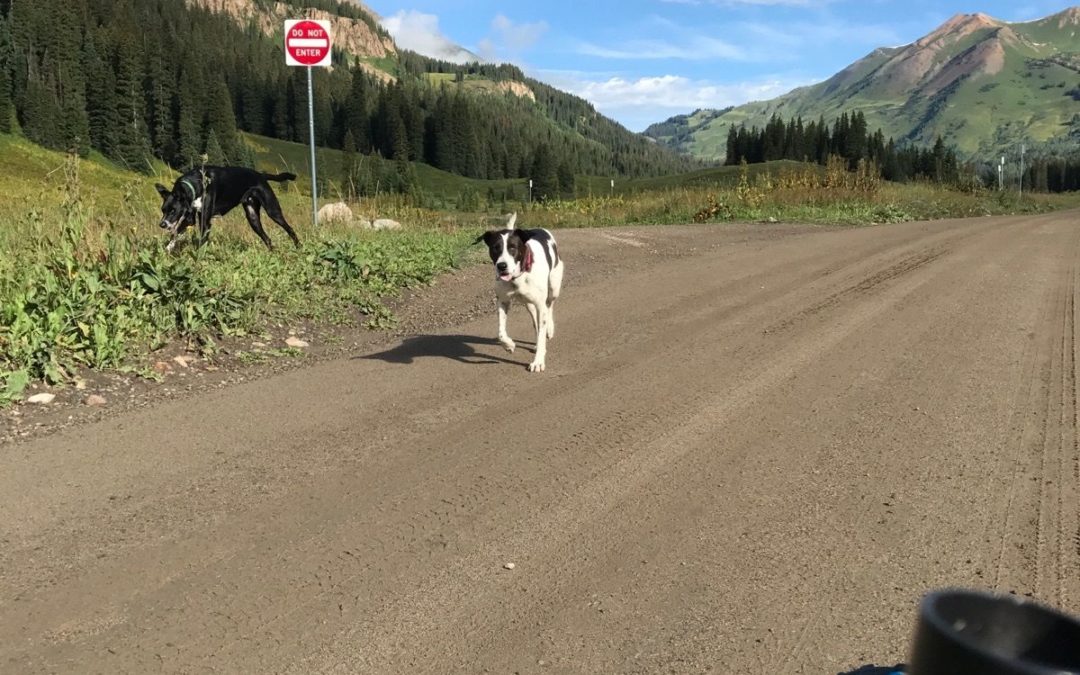 Yesterday morning I woke up to the now familiar patter of rain. It was actually pouring, so a bit more than a patter. We’ve had such a rainy summer here! I can’t complain too much because it means we are not suffering from forest fires. And everything is green and beautiful.

Anyhow, I had big plans to take my rented hand cycle out to Gothic Road and go for a ride with Puck and Bandit. Pre knee incident I would have just changed my plans, gone for a hike or something. But changing plans now is a much bigger ordeal. I had spent a long time installing my hand cycle rack getting the bike on it. Not an easy task with one good leg. And what was I going to change plans to? A 2-block hobble? That sounds like fun.

The weather forecast claimed the rain was going to stop and the sun come out. So I decided to wait an hour. The rain did stop. The sun did come out. Or at least it was making an attempt. So at 8:00 I loaded Puck and we picked up Bandit on our way.

I hit the beginning of Gothic Road where it turns to dirt and it was an amazing muddy mess. The car was sliding all over the place and I had to proceed at a crawl. This wasn’t looking good. But the first part is the worst, so I kept driving. After a few miles, it was a bit more passable. By the time we reached our parking spot, I was feeling more optimistic. It was muddy, but not deep wheel-stopping mud.

I should have taken a photo of the hand cycle before I took it off the back of the car. There was so much mud on the wheels that you couldn’t really even tell they were wheels. I had to spin them to get some of the mud off. Of course, the mud flew right onto me when I did that. I could have seen that coming. I realized we were going to get very muddy. I felt like a kid ready to go jump in puddles.

It wasn’t too bad on the hand cycle. There were a couple sections where the mud was pretty deep, but I made it through. And the dogs were having a blast.

After that, my arms were torched so we turned around. Downhill in the mud, woo hoo! The dogs were all over the place. At one point, they were leaping across the culvert and all of a sudden they both nearly disappeared. Turns out it was not water flowing, but a clay mud bog. Bandit made it out pretty quickly but I thought I might have to get up and pull Puck out. He was in deep. I kept cheering him on and he finally struggled out. 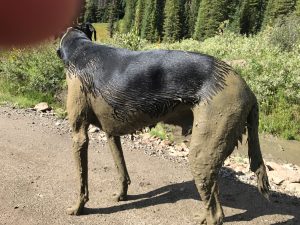 I couldn’t help myself – see photo – I laughed so hard I almost peed my pants. Puck was really distressed about this mud that was all over him. And I couldn’t stop laughing. The dogs looked like two bog monsters. Puck was definitely worse than Bandit, but they were both pretty covered.

We made it back to the car and after hoisting Puck in (hey, after 4 knee surgeries you wouldn’t be jumping into a car either) I looked about the same as he did. The car may never be the same. We were one traveling muddy mess.

I spent 10 minutes at the car wash trying to get the clay mud off the bike. Then I took the dogs home and spent about the same amount of time trying to clean them off. Neither one was very pleased with the hose down. I think they will both have a brown tinge for several weeks!

It took me the whole morning (and then some) to accomplish that, but it was worth it. The mud, the laughter, the dog licks (I’m a captive audience on my hand cycle).

Seriously good for the soul.