Dogs: The secret to happiness. 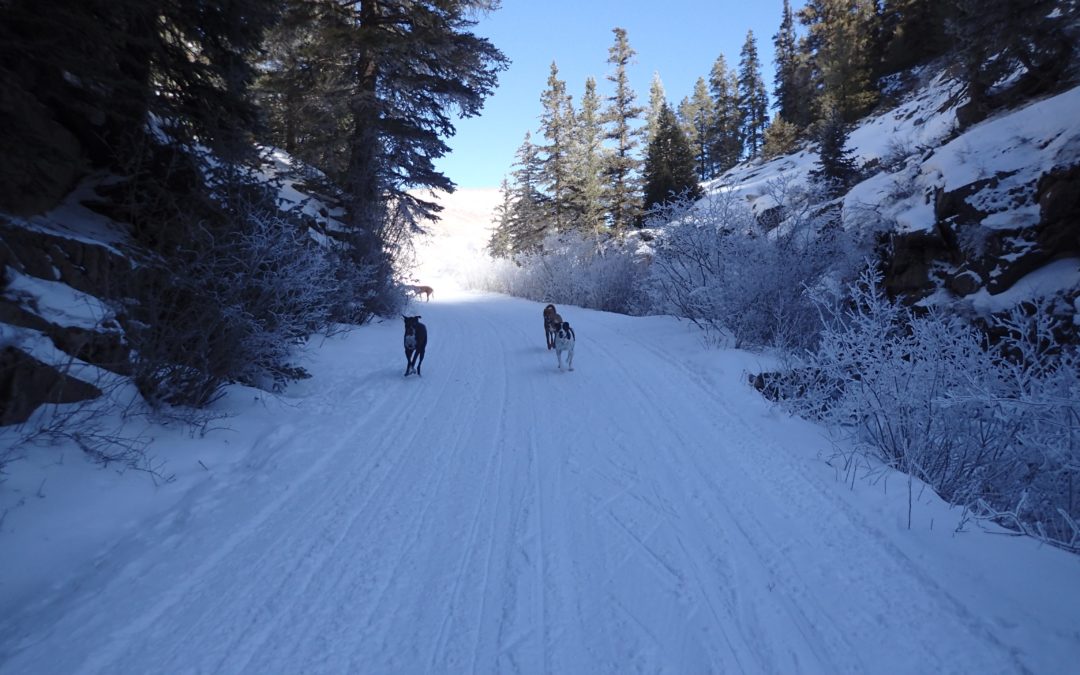 I’ve been remiss. Sorry. I don’t have anything all that exciting to report. But I’m going to report anyhow.

It has been a good week. My friends have been out of town, so I have taken Frank and Edgar out with me and Puck every day. On some of the days, we grab Bandit too and the five of us head out to terrorize the world. All four dogs make me laugh. And they keep me on my toes.

I should introduce the posse:

You know Puck well by now. Puck loves Bandit, Frank and Edgar. It is such a treat for him to go out with any of them. And a treat for me, because after these outings, Puck is pretty much comatose for the next 24 hours. There it is: My ulterior motive.

Such a sweet girl. But don’t be fooled, when Puck and Frank gang up on her, she takes care of herself. Bandit is hard to tire out and when she is fresh, watch out! She will do wind sprints all day. Bandit has a soft heart and when someone needs a lick, she is there to give it. She also likes to run after snowmobiles, which is amusing for me, perhaps a little worrying for the people on the snowmobile.

Edgar is the old man, just my speed. He’s not really that old, but he keeps to himself and has little interest in playing with the three kids. He had the same knee surgeries that Puck had. He is a gentle soul. However, I’m pretty sure Edgar is the one who would protect me if needed, while the others ran for the hills. Edgar and I have an understanding: When the other three are tearing around the hillsides, he occasionally gets some extra treats. We don’t tell.

How to describe Frank? It is impossible not to love Frank. Frank doesn’t trust easily. He will take a detour halfway up a hillside to avoid a group of people. But when he lets you in to his circle, you feel special. Frank has to ride in the middle of the back seat with his head and front paws on the center console next to the human(s). That’s just the way it is. Sometimes he will rest his head on my arm, which melts my heart. Frank is also very fast, even faster than Bandit. He loves to be chased, just like Bandit. That’s where Puck comes in. Puck will never give up, no matter how much slower he is. 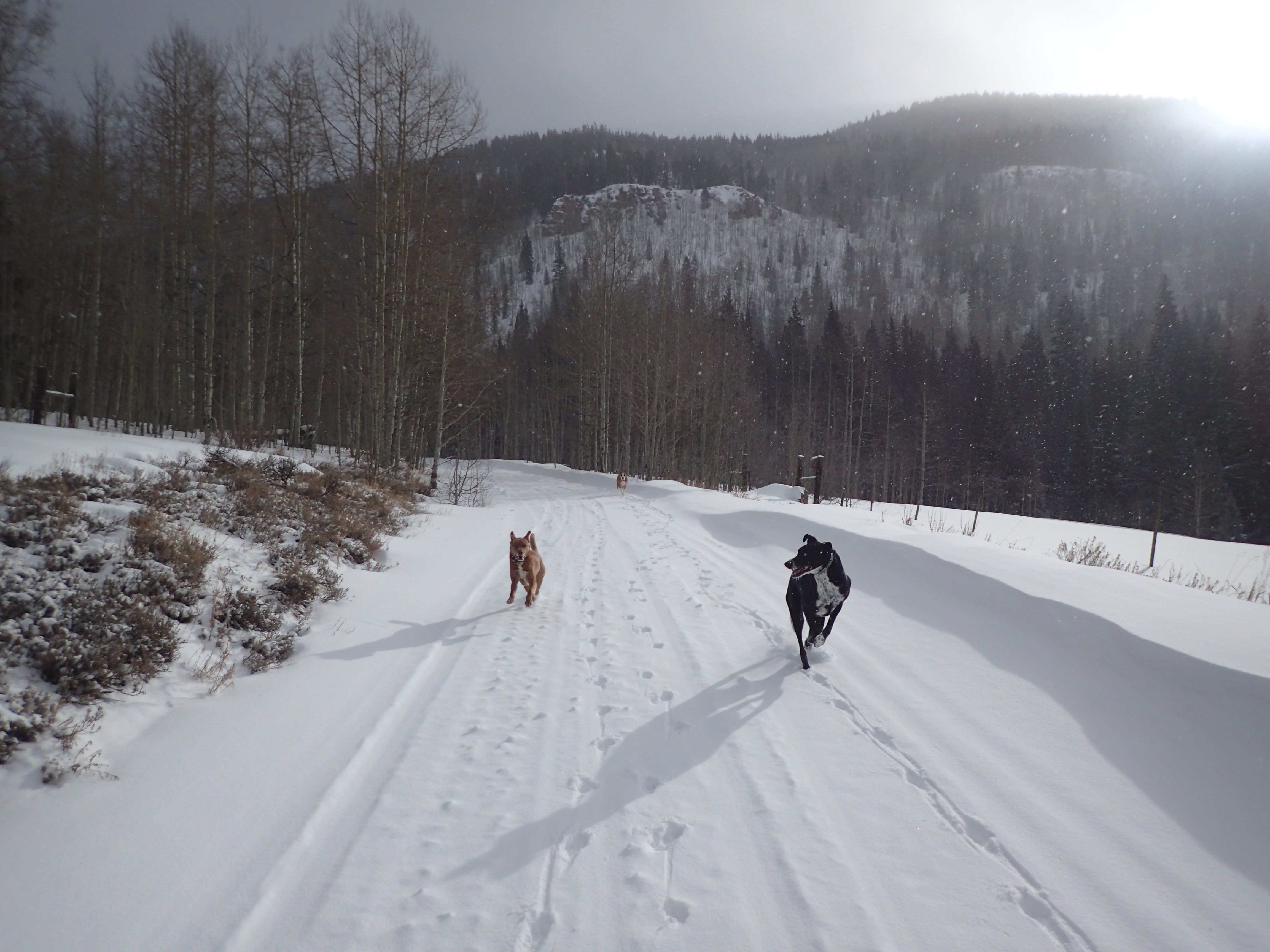 Puck, Bandit and Frank play well but they also act like siblings. Their play will occasionally deteriorate into a rugby scrum, usually after a 3-way head-on collision. A WWF match might be more accurate. They aren’t out to hurt each other, but none of them can let go, even though none of them knows what they are “arguing” about. Especially Puck. His WWF nickname would be THE AGGITATOR. In his defense, it’s hard when everyone is faster than you, even the girl in the pack.

The four of them are surprisingly well behaved. When I need to keep them out of the way of traffic or from jumping on another human, I have learned to make them all sit while I hold treats in my closed fists. They try to eat through my knuckles, but it keeps them occupied. When I run out of treats, all bets are off.

Yesterday, it was cold and windy as we headed out on a snowshoe. We chose a route we hadn’t been on for a while. The dogs had requested new smells. At one point, when trying to do the right thing and stay on the designated road (where snowmobilers had shortcut), we ended up in very deep, windblown snow. For about 10 minutes, we desperately trudged through snow higher than the dogs. Bandit and Frank are bouncy enough that they could bound (slowly) through the snow. Puck has long legs, so while he struggled, he was ok. Edgar and I? Well let’s just say there were times when he and I thought we might not make it. That they might find us in the spring. I was trying to cut a path for Edgar with my snowshoes, but we struggled. At one point, Edgar and I were catching our breath, in snow up to my thighs. Bandit noticed and came back to lick Edgar, to let him know she wasn’t going to leave us. It was adorable. If I had not been stuck in my own snowdrift, I would have taken a photo.

It’s been a good week with lots of dog love! 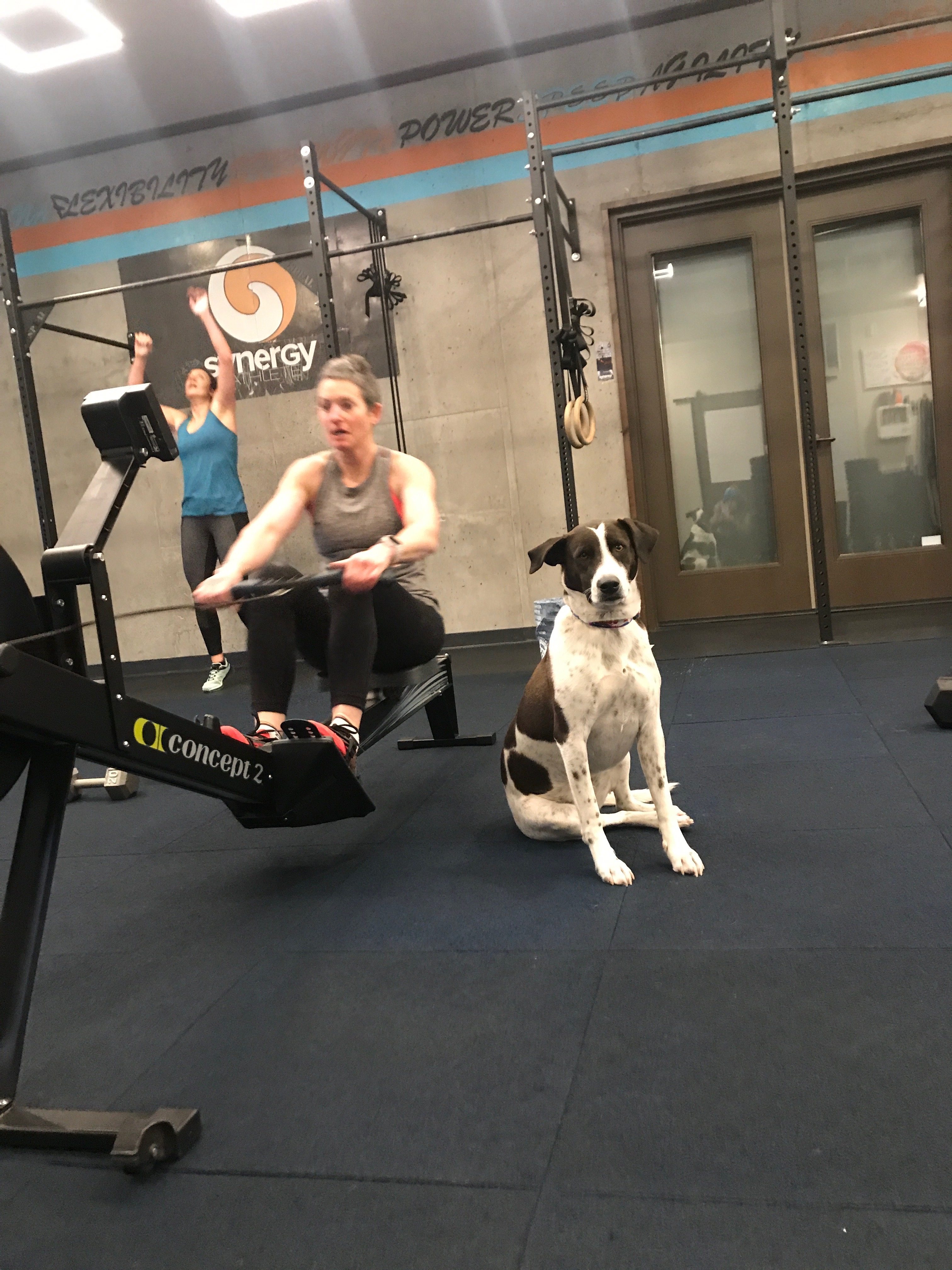 Bandit helping me get through the CrossFit Open workout

As for my recovery and training, it feels as though I broke through a plateau. Early in the week, we did sets of heavy squats in CrossFit. I have struggled to regain the ability to squat at full depth with weight. This time, I was able to squat much more than I expected AND get to full depth. I didn’t realize it until one of my CrossFit buddies asked when I got my squat depth back. I answered, “Today?”. Woo hoo!

The CrossFit Games Open started this past Friday. For you non CrossFitters out there, the Open is the start of the annual CrossFit Games competition. It’s Open, because anyone can compete. The serious CrossFitters are trying to qualify for Regionals, but the rest of us are just competing to push ourselves. Friday was the first workout.

The goal was to do as many rounds as possible in 20 minutes of:

I surprised myself by going Rx on the weight, which was heavy. At one point I looked at my heart rate monitor and it said 203 BPM. I am 99.9% sure it was a glitch because that’s higher than my max heart rate, as far as I know. On the other hand, I felt like I was working hard enough for it to be 203!

I’m running more on snowshoes and spiked shoes outside. I’m still battling with Altra IQ lady on the treadmill. I am naturally settling into a much faster cadence than ever before, which is terrific. My struggle is that I continue to run on my toes on my left foot. I have to mentally stomp down on that foot to correct this. It will come, I just have to keep working at it.

I’m still not feeling like Gumby, but I’m diligently doing lots of mobility. I will start adding in more run drills now too as I think about ramping up my running.