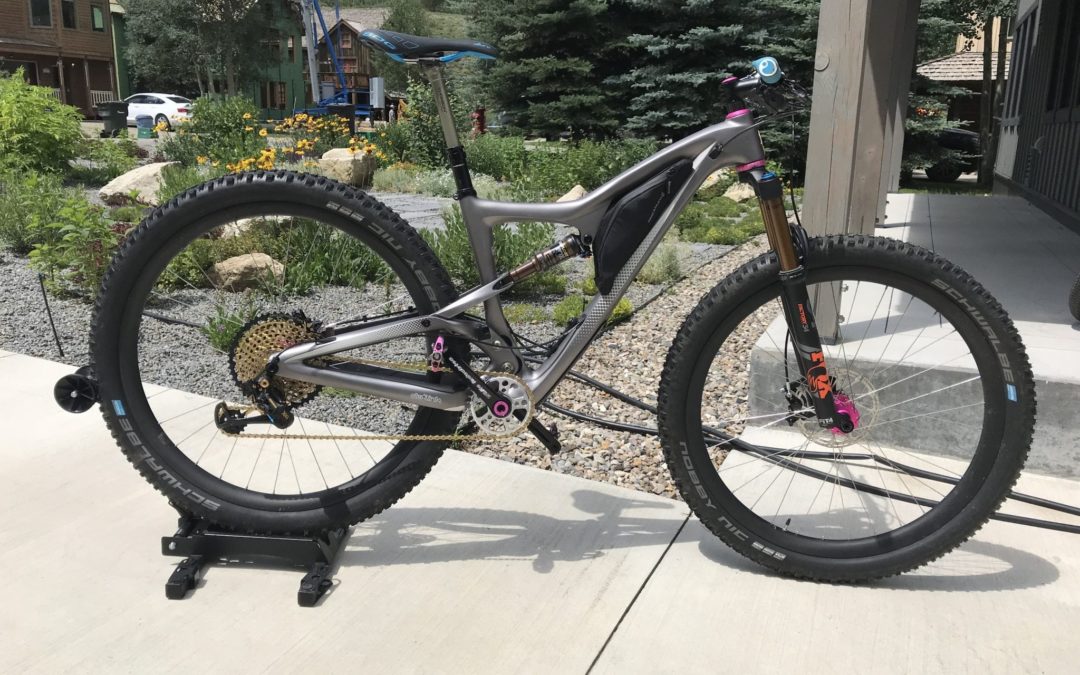 Meet Stella. Mark built her for me and she is so beautiful it was hard to get her dirty the first time (ok, not that hard). Don’t let her looks deceive you though, Stella is one tough chick. And thanks to me she already has the scars to prove it.

It was love at first ride for me and Stella. She is perfect for me and it was clear that she immediately made me a better rider. Thanks Stella! But I knew the true test – how much better CAN she make me – was a trail called Doctor’s Park near Crested Butte. Doctor’s Park includes a long, tough climb but is really known for its downhill. It has several miles of amazing flowing singletrack in the middle of the descent, but it’s the top and the bottom that define it for me: Steep, technical singletrack at the top and sandy, rocky technical singletrack at the bottom. In all the times I’ve ridden Doctor’s Park, I would say I walk over 80% of both these sections. Probably over 90% if I’m being honest. And they aren’t short sections, so it adds up to a lot of hike a bike.

Monday was the day of truth. I dropped Puck at daycare – this was too big a ride on a hot day for him – and headed to the start. As I pedaled up the climb I realized I had never thought about why they call it Doctor’s Park. I realized as the lightbulb went off that I should not ponder that any more.

As burly as she is, Stella climbs really well. The suspension and geometry make technical ascents easier. It was still a leg and lung burning climb, but it felt pretty smooth.

The cows were out, which I wasn’t expecting. I had to execute many CPAM’s (cow patty avoidance maneuvers) on the top singletrack. Several fresh patties caught me by surprise and soon Stella and I were liberally spattered with cow poop. Sigh.

Finally, we reached the start of the downhill. I set the shocks to max plush, took a deep breath and went for it.

By the time I reached the bottom technical section, I was feeling pretty pumped. As I entered a steep, rocky section (read: high consequence section), I chose the top line and went for it. Then I committed the cardinal sin of mountain biking: I hesitated. Just long enough to lose my momentum. It’s funny how long a fall seems to take. As I was falling to the downhill side, several thoughts went through my head: “That was really stupid”, “This could be really bad”, “Not my knee, please not my knee”. We landed hard. It hurt. And, yes, I landed right on my knee. But the positive news was that we managed not to continue falling down the slope. As I pitifully picked us up off the rocks, I saw that Stella’s handlebars were rotated 180 degrees. And then, I saw the scratch. The brake levers were low enough so that when the handlebars executed their 180-degree rotation, the lever attachment scraped across the top tube.

I am glad no one was there to see me, because all I could say was “I am so sorry Stella, I am so sorry”. I almost cried. I was so worried about Stella that I didn’t even notice how bruised I was.

Cursing myself for being so stupid, I continued down the trail, determined not to let this affect my confidence. Two switchbacks later, I did the SAME THING, but on the other side, with the same consequence: more bruises for me and another scratch for Stella. 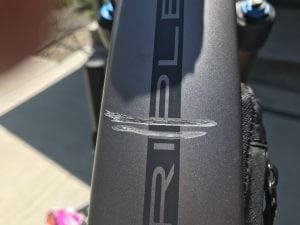 This time I think I actually cried.

We made it down the rest of the trail. I was a bit more conservative because one more fall might have put me over the edge. I was still really happy about how I had been riding, but sad I had scratched Stella so badly. My first stop was my local bike shop to make sure Stella was not seriously damaged. And to raise the brake levers. She wasn’t, but we agreed I should call Ibis to make sure the scratches were just superficial and hadn’t damaged the carbon. Ibis looked at the photos, assured me it was just a flesh wound and said a little touch up paint was all she needed. Phew.

I was bruised and battered but it appeared I had done no serious damage to myself either. Double Phew.

On Tuesday, Puck and I headed up to Long Lake for “Paddleboarding with Puck Take 2”. I strapped on my paddleboard backpack, and we slowly hiked the mile or so up to the lake. Inflatable paddleboards are great and portable, but they are also heavy and cumbersome to hike with. 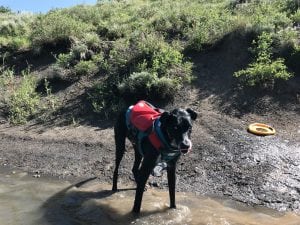 Puck in his floaties

It was already hot out and so when Puck saw the lake he ditched me immediately. As I was inflating the paddleboard, he splashed around. He was in his happy place.

Once I was ready it was time to suit Puck up: Wetsuit on. Life vest over wetsuit. I assured him that the other dogs would NOT laugh at him.

I started paddling along the shore and Puck jumped in and started swimming. He had a visible moment of panic as he searched for the toy hanging off the back, which was not there this time. Then he noticed that the shore was 10 feet away. We paddled for about 20 minutes along the shore. Puck would swim for a bit then jump out and run like a crazy dog along the shore. 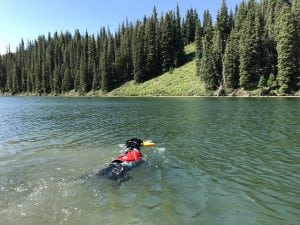 Several hikers passed by on the trail above the lake and one woman hollered down that I was living her dream. A wonderful way to start the day.

This weekend I will but running a 50K at Copper Mountain. Puck and I drive to Breckenridge tomorrow. I have not run this far in many years. Wish me luck!