The three most common things I hear (and I hear them a lot) when I am out with Puck are: “Wow, look at those eyes!”, “What a beautiful dog!”, and “What is he? A Great Dane?”

The eyes are pure Husky. And he is a beautiful dog, in my totally biased mom opinion. However, if you look at him long enough you realize that he is also a funny looking dog: Moose-length legs, huge barrel chest, skinny butt, slightly funny running style (hey, you would run funny too if you had four knee surgeries!). It’s kind of like they put him together with all the spare dog parts hanging around. Frankendog?

And last I checked, Great Dane was not a sought after bloodline for sled dogs. No matter how he turned out, Puck was bred to be a sled dog. His 6 sisters are all becoming accomplished racers on the team. The boys got the faulty genes in the litter. No surprise there, right ladies? Kidding, kidding!

Puck loves water but he loves water he can wade in. He has always had a strong aversion to swimming. The minute he senses it is getting too deep to wade, he wants out. 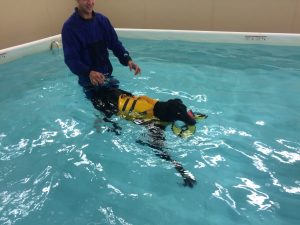 To be fair, he’s done a lot of forced swimming in his life – swimming was a major part of his knee rehab. At the place we did most of his rehab swimming I always had to specify that I needed it to be with Matt; Matt was the only one who could carry Puck into the pool! Puck would chase and gather the toys, but if Matt let go of him for a second, Puck would channel Michael Phelps and beeline for the exit. When we couldn’t get to the pool, I would occasionally take him to a lake and stand there in my wetsuit holding a very unhappy dog swimming in place.

This morning we woke up to more rain after a night of rain and lots of rain in general the past week. So we had to cancel our planned running date with Alexis and Frank, the trails were just too muddy. Not sure what to do on such a gloomy rainy day, I decided to hike with Puck up to Long Lake – it’s a short hike and the lake has a nice shore for Puck to play in. He was having a blast ripping in and out of the shallow water. Getting his mom very wet. 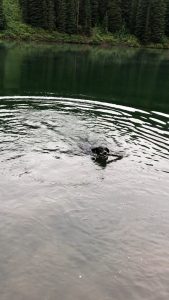 I’m not sure what made me do it, but I picked up a stick and threw it into the deeper water. Puck bounded after it (he does love his sticks) but I figured he would turn back as soon as he realized it was beyond wading depth. You can imagine my surprise when he just kept going. He managed to find the stick and swim it back to shore.

After that it was like a switch had flipped in his brain: Whoa, this is a GAME! The minute I picked up a stick, his inner retriever would come out. He was so excited (which resulted in an even wetter Mom). On one toss he couldn’t find the stick, so he just kept swimming. I was getting a little worried that I would have to dive in after him but finally he abandoned the stick and came back.

Talk about a proud mom!

And now I have another tool in my “how am I going to tire Puck out today” tool box.