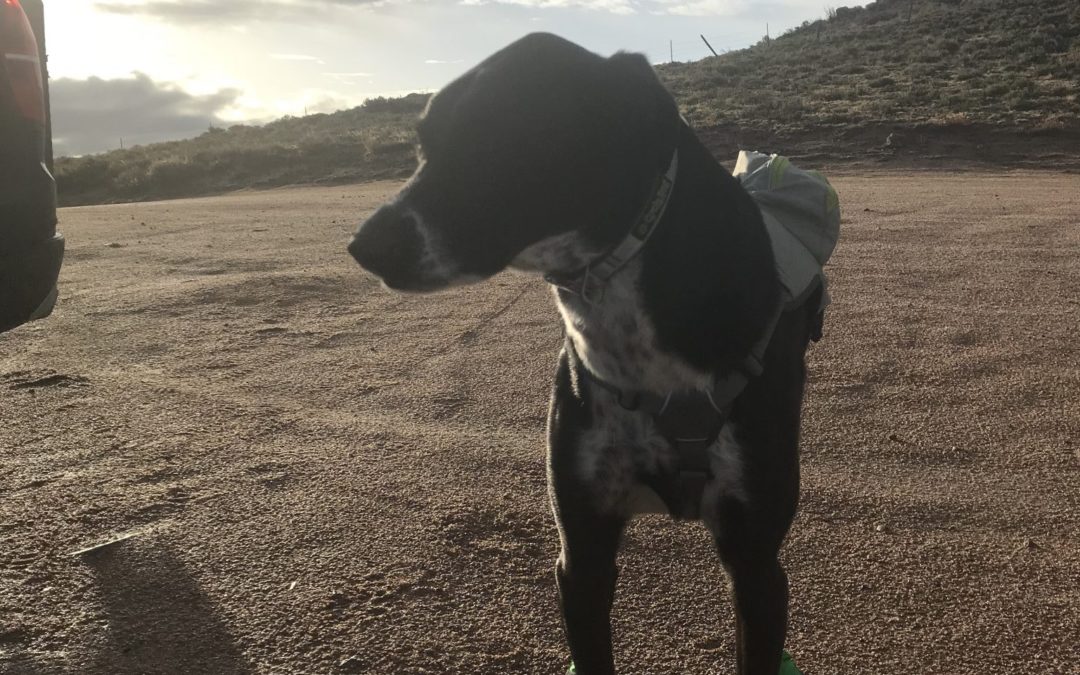 Hi, this is Puck. My Mom told me I could write whatever I wanted for my first post. Boy is she going to be mad when she reads this.

A few things you should know about me:

I’m a little OCD. I can’t help it. Sometimes I fixate on things, like annoying snow stuck to my fur, and I can’t let it go. I can really work myself into a state when I fixate on something like this.

OCD aside, I’m a pretty smart dog. Sometimes my parents just don’t get me.

I am NOT build for heat. I’m 90 pounds (all muscle) and I wear a black fur coat. 50 degrees feels like a heat wave and I prefer all our expeditions to be near a cold running stream.

So, the past couple of weeks my Mom and I have been running and biking down at a place called Hartman Rocks in Gunnison. It’s high desert terrain and it dries out long before the other trails around here. Which is great, I like trails. But there is NO water out there. It gets hot fast when the sun comes up. And the sand is really hard on my paws.

To give my Mom a little credit, she did notice after our first couple of trips out there that I had sore tootsies. I figured that was the end of Hartman Rocks for us, but Mom had other ideas. 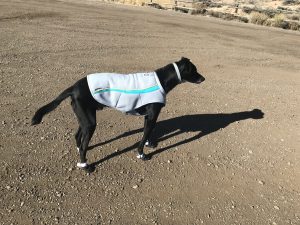 The next time we went there, she came armed with some of my winter booties and a cooling vest. Which she then put on ME. Ok, so my feet felt a lot better and I really liked the cooling vest, but the other dogs were laughing. The people too. I sounded like a galloping duck. That is hard on a dog’s ego. The only saving grace was that Bandit wasn’t with us that day because she never would have let me live that down.

I guess Mom decided booties were a good idea, so we stopped by my favorite dog store where I like to taste all the bones and chewies. But instead of goodies, she picked up some red RuffWear booties. I heard her debating the benefits of the waterproof vs. non-waterproof ones, and she decided to go with the non-waterproof ones. They were red. I like red. 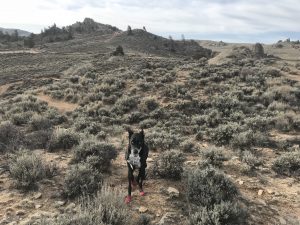 The next day, she trucked me out to Hartman Rocks again to test out the new red booties. No cooling vest today because it was chilly out. The booties were ok for a while, but then I started to get sand in them. I tried really hard to tell my Mom what was going on. She checked the booties multiple times, but she never took them off and looked IN them. If she had, she would have realized that my paws were slowly being squeezed by all the sand that was pouring in the stupid non-waterproof fabric. I was getting pretty panicky, but Mom thought I was just being OCD. She went so far as to call me a pansy and tell me to suck it up. Her own son! I tried, I really tried. And I did make it back to the car. She took my booties off then and realized what I had been trying to tell her. She felt bad. Really bad. I got a lot of treats out of that, which was nice. I heard mom muttering something to herself, it sounded like “I should have remembered Moab”. I think her adventure racing buddies will get that.

I figured that was the end of the booties.

Not to be deterred, we went back to my now less favorite dog store and bought the waterproof version of the booties. Today, we went out for a long run and she put them on me. I tried to stay in the car, I had a real bad feeling about this. But she made me go. 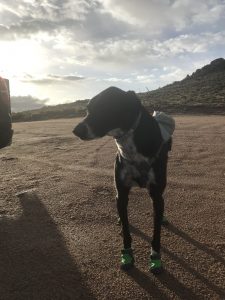 I have a bad feeling about this.

I have to admit; the waterproof booties were not too bad. I made it for almost the whole run without having to attack my own paws. I probably wouldn’t have noticed I had them on, except I really had to poop. And I couldn’t figure out how to poop with my booties on. So, I had to run most of the run needing to poop. Have you ever done that? NOT FUN.

My Mom knows my poop face, so she gave me a reprieve from the booties at the end. Relief at last! She says I am going to have to learn how to poop with the booties on. We’ll see.

Tomorrow we are headed out on a trip. I like trips. But she says we are going to lots of desert places, so I’m going to have to wear my booties and my cooling vest and maybe even my water pack. But I get to hang out with my Dad. And he snuggles with me, so I guess that makes it worth the pain and suffering from my Mom.