Tuesday was a great day. And then it wasn’t. I got in an early run with Puck and Bandit, felt great! My new running shoes arrived: An Altra shoe with slightly more aggressive tread than the one I had been running in. They felt amazing when I tried them on and I was looking forward to taking them out for a run Wednesday.

What else… oh yes, then I slipped. I still cannot quite understand what happened, it doesn’t seem possible. I was walking Puck on leash for his afternoon potty walk. I rarely walk him on leash but he is so obsessed with the grass snakes in the afternoons that I leash him to keep him from hunting too many snakes! He doesn’t kill them, but he gets a good lick in. He really doesn’t like how they taste, but that doesn’t slow him down one bit. 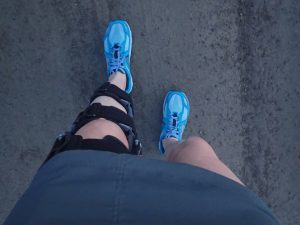 Taking my new shoes for a hobble

Anyhow, I probably wasn’t paying much attention. And then Puck saw a snake. And pounced. This jerked the leash in my hands and since I wasn’t paying attention I lost my footing and went down on my butt. Nothing unusual about this; honestly it happens all the time. I’m kind of a klutz.

This time however, I heard very bad popping sounds on my way down. And my left knee looked really odd. Not to mention it hurt like hell. So I sat there. Stunned. Knowing that something was very wrong, but still in a bit of denial: I’ll just sit here until it goes away. But as I looked at my knee I knew it wasn’t going away. So I sat there on my butt in the dirt and started crying. Puck was very confused and tried to tackle me – this is a game, right mom?

Let’s look at the bright side here:

First stroke of luck: I was only two blocks from home. When a very nice woman, Rebecca, asked me if I was ok, I was smart enough to say “no, I don’t think I am”. She got me up and took Puck. I was able to walk with a straight leg but if my knee bent at all, it completely buckled. But she got me home!

Second stroke of luck: It was 4:00, so Griggs Orthopedics was still open. I called in tears and they said they would get me in immediately.

Third stroke of luck: Dr. Griggs. Amazing surgeon. He sees a lot of us folks here in the mountains. Amazing person. He was so damn kind to me that I just kept crying. It makes a huge difference when you know you are in good hands.

Fourth stroke of luck: Being in Crested Butte with an amazing support system. More on that later.

Initial Diagnosis: Complete rupture of the quad tendon. Confirmed by MRI on Wednesday. What this means is that my quadriceps muscle is no longer attached to my kneecap by a very important tendon. Oopsie daisy! I have to say it is pretty interesting to look it, I just wish I could look at it on someone else. It looks like the muscle has just rolled up my leg; there is a big dent above my kneecap where that rolled up muscle should be.

On a side note, I was supposed to be running a 26-mile trail race in August with Grant, Shawna and Chip in Park City. I was admittedly a little worried about that distance. Now we know I will go to great lengths to get out of a race!

Dr. Griggs got me in a brace immediately so I have been able to walk the last two days. He was hoping to get me into surgery Wednesday so I didn’t eat all day just to be safe. But the insurance company was taking its time on pre-approval. So after the MRI, they had to send me home. I think I ate a full day’s worth of calories in about 10 minutes. Talk about hangry! And just ask me how I feel about insurance companies right now.

So now I have surgery today (Thursday) at 2:30. Another day of hunger, but it is worth it to get this thing fixed and start on the very long road to recovery. It makes me tearful just to think about it the recovery ahead, but hopefully by this time next year I will be 100%.

And what about Puck you ask? Puck has been at doggie daycare having a blast.

As a parent of a high energy dog, it is a little scary when you realize you are pretty much debilitated. But I have been completely embraced by my friends: Alexis and Carrie leading the charge here. It feels like an army of friends has been mobilized to help me. It has been truly amazing and humbling. It is hard for me to ask for help but I haven’t even had to ask. Help just shows up. More on that later, it deserves it’s own blog post. I feel so damn lucky to have this community right now. And to have all the support from my remote friends and family who have been keeping my spirits up.

So, even though I am looking at a long recovery; even though this isn’t really how I wanted my summer and fall to end; even though it is going to be a struggle for a while: Life is pretty darn good.