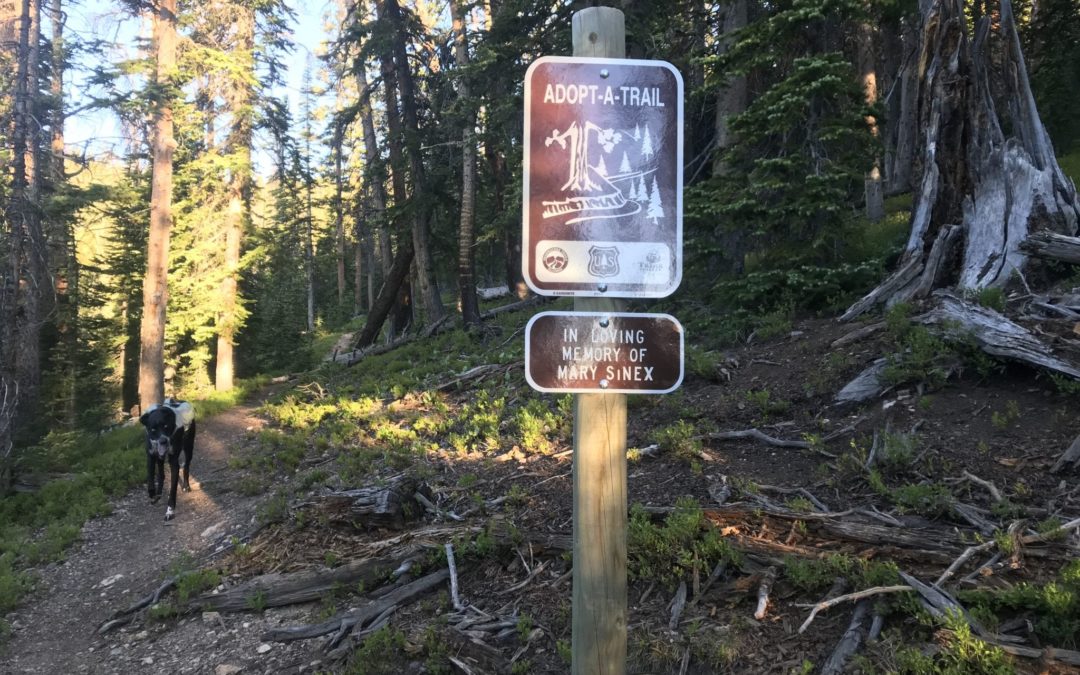 Years ago, we co-adopted several trails with one of my oldest and dearest friends and her father (also a dear friend). They lived up near us in Fraser back then and had recently lost Mary, mother and wife, to cancer. Being avid trail users, we adopted several of our favorite trails in memory of Mary. Each year the four of us would head out with saws, loppers, shovels and various other tools and make a day of trail work. 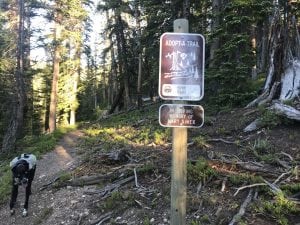 Then they both ended up moving. We lost our running buddies and trail team! But by then we felt very attached to these trails, so Mark and I have maintained them over the years.

Unfortunately for all trail adopters in this area, the pine beetle epidemic killed most of our lodgepole pines and left a large number of dead trees. Once dead, it was only a matter of time before these trees started falling. Apparently, they prefer to fall across trails. At least that’s how it feels.

The first year the trees started falling in earnest, we realized we would never make it through the vast number of trees on our trails in one year and had to call in the hot shot crews. Ever since then it has been Mark, Cary and our hand saws against the annual deadfall. Our trails are in a Wilderness Area, which means no chain saws allowed.  But let’s be honest, would anyone feel safe with me wielding a chainsaw?

Mark’s recently broken foot meant that this year it was up to Puck and me to clean up the trails. We will be headed to Crested Butte soon, so I knew we needed to get on the ball.

Thursday, we tackled our first trail (Bottle Pass). We were loaded down: Me with 5 liters of water (3 for me, 2 for Puck!), food, two saws, one Pulaski type tool, and various other tree cutting aids; Puck with his pack full of more water and dog treats. Ready as we would ever be!

By 5:30 we were hiking up toward our trailhead, which is over a mile from the parking area. There is really no flat on our trails, so we (I) were moving slowly. We reached our trail and were happy to see our sign was still standing. First victory! 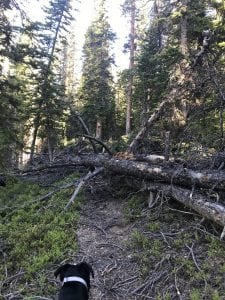 One little tree across the trail right away but we made short work of that. Then we rounded a corner and found our first major trail obstruction. It was so bad that we both considered turning around and pretending we were not the trail’s adopters. It appeared that one large tree had come down and taken 4 other medium size trees with it. Right smack dab in the middle of our trail. Puck deemed the situation “bad” and sat down to keep an eye out for Heffalumps. I got out the saws and tools and went to work. 1 ½ hours later, we could see our trail again.

Feeling pretty good about ourselves, we headed on. The next mile of the trail was miraculously clear. We reached the saddle and headed down the back side. Which was not clear. Plenty of opportunities for me to hone my saw skills. Each time I would clear a tree off, I would say to Puck “maybe that’s the last one”. Ha ha. Over 6 hours after we started, we reached the bottom, our turnaround point. More importantly, we reached a stream. Puck + stream = his life is worth living again. I was officially pooped. So was Puck. We still had to go back up and over the trail we had just cleared but at least I didn’t have to do any more sawing. 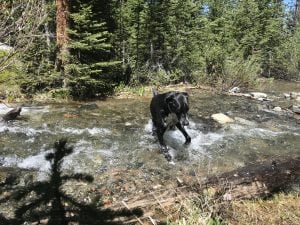 On Saturday we set out to clear our second trail (Bottle Peak, which forms a loop with our first trail). We had a longer drive to the trailhead, but we were still on the trail by 6:20. I was convinced this trail would have fewer trees down. The power of positive thinking? The trail quickly disabused me of that notion. We slowly made our way up, one tree at a time. Puck was pretty convinced a Heffalump was following us, so he was on guard the whole time, staring nervously down the trail behind us. What he heard or smelled I will never know, but it was out there. 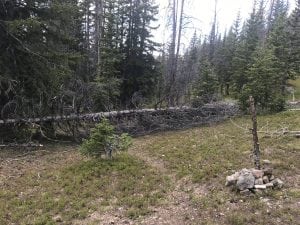 I was celebrating as we closed in on tree line, surely there were no more trees down! And then. Yep. We rounded the corner and found a beast of a tree right across our trail about 100 feet from tree line. I almost cried. Puck lobbied for pretending we hadn’t seen it. But after all the work, I just couldn’t leave this one last tree down on our trail. I knew it was the last tree. After this, we would be above tree line until we connected with the trail we had cleared on Thursday. That didn’t make it any less daunting. After a lot of sawing, some shoving, more sawing, more shoving, we were done.

We climbed to the top of Bottle Peak, the top of the trail, and sat down out of the wind to eat our final sandwich/dog treats. Puck caught whiff of my sandwich and realized he was getting the short end of the stick. Next time, I will be a better Mom and make Puck a sandwich too. He tried really hard to steal mine. I shared a bit, but I wasn’t too keen on his dog treats.

We still had a long hike down. But at least it was down. With a creek along the last couple of miles.

We were both completely pooped from our two trail days. Pooped, but happy with what we accomplished.

We’ll be back next year. I am sure many more downed trees will be waiting for us!