A trip down memory lane: Our adventure at Le Grand Trail Des Templiers 2007. 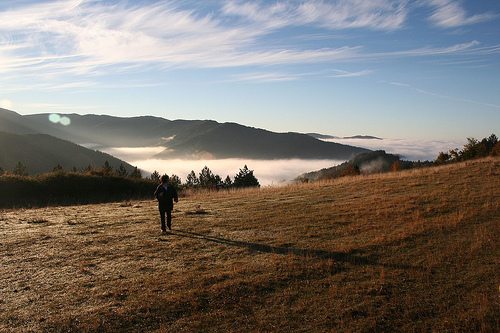 I have a horrible memory. Always have. I like to think that I’ve just had too many adventures and my brain can’t keep up. Or something. But when I opened today’s iRunFar email update, my brain lit up. Les Templiers…? Wait… Les Templiers…! We ran that race a few years ago. Yes we did.

Turns out it was 10 years ago. But who’s counting?

Le Grand Trail des Templiers is a 76 km mountain trail race in the south of France near Millau. Our adventure was born when Anne (my sister in law) suggested we run it. France? Ultra run? Hell yes we were in!

Anne did all the planning and 8 (9? 10? 11??) of us descended on Millau in early November 2007 not really knowing what to expect. It turned into an adventure even I can’t forget. Here are some of the highlights.

Anne found this amazing old castle to rent (note that this was before Airbnb & VRBO). It was situated on top of a beautiful hillside with a view of the spectacular Millau Viaduct. Breathtaking. The castle itself was, well, odd: Complete with jars full of dirt (we hope it was dirt), unique French pornographic books (don’t ask), and a caretaker who seemed particularly unhappy to have guests. We found out later that his wife had recently left him. Perhaps he was normally very cheerful. Perhaps not. On our first morning as we were looking around for the advertised petit déjeuner, he handed us a bag full of croissants and a carafe of coffee. Welcome to France!

Note: This particular castle is still available for rent if anyone would like to experience it! Please report back if you do.

On a training run before the day of the race, we found ourselves in the midst of a heard of sheep. The sheep started running with us. How cute, we thought. It took us a while to notice the shepherd running after us – and his sheep – yelling Arrête! Arrête! Translation: Stop! Stop! It turns out he did not WANT his sheep to go that way. Oops. Stupid Americans.

One morning, as we were driving into town, we passed a car parked on the side of the road, which happened to be at the top of a very steep ravine. We figured the occupants must be out hiking. Upon our return to the castle later that day, we noticed what appeared to be smoke coming from the bottom of the ravine. On closer inspection it appeared to be the burnt remains of a small white car, exactly like the car we had seen parked there earlier in the day. We weren’t quite sure how to alert the authorities. I recall the fire squad made it out at some point, but I cannot remember if we were responsible for this. We wondered what the poor people thought when they returned to find their car was no longer a) where they parked it and b) anything resembling a car.

Mark is a great driver to have in Europe because he stays calm in situations in which I would unquestionably hide under the steering wheel. And so it was that we were descending a one-car-sized street with a car coming in the opposite direction. Neither Mark nor the other driver slowed down or flinched as they approached each other. All of us passengers could only look on in horror. As the cars passed, it sounded like an explosion. The side mirrors had collided. Clearly the European car companies expect this: The mirror was fine. Mark popped it right back in and kept driving. When in France…

You must remember that the Googles (as we call them) weren’t all powerful back in 2007. I was pretty sure I had seen somewhere that the weekend of the race (which was on Sunday) was Daylight Saving Time in France. But I wasn’t 100% sure. Being the token French speaker, with my vast vocabulary of maybe 50 words, I figured I’d better find out. What if we set our clocks back and it wasn’t actually Daylight Saving Time and we missed the start of the race? When I asked the waiter at one restaurant, I was 90% certain that he had just confirmed it was indeed DST. But that 10% doubt had me worried all night. Turns out it WAS and we made it to the race on time. Phew. 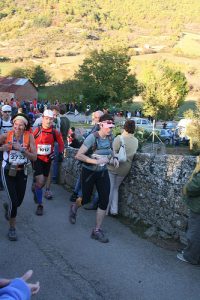 Mountain trail running races in Europe are a completely different experience than in the United States. For one, they are extremely popular. The race has a cap of 2500 people and the year we did it over 2200 people finished. That is a lot of runners!

We were some of the only Americans running the race that year. We lined up at the start in the dark with absolutely no idea what the announcer was saying. I don’t think we realized we were at the very back until the race began. On the first long hill we looked up and saw several thousand headlamps snaking up the hillside. We looked behind us. No headlamps. Oops.

The course was spectacular. The terrain was tough but breathtaking. At one point we topped a mountain and looked down on fog sitting in the valley below.

The aid stations had Perrier and Brie with French baguettes. Seriously. I was in heaven.

There were spectators, even on the most remote sections. One group even sang “She’ll be coming round the mountain” to us when they realized we were American.

We all finished – in various stages of body breakdown – but we finished.

That is the only trail race I’ve ever done in Europe. But as I take this walk down memory lane I can’t help but think perhaps I should include a European race on my recovery tour schedule. Anne?