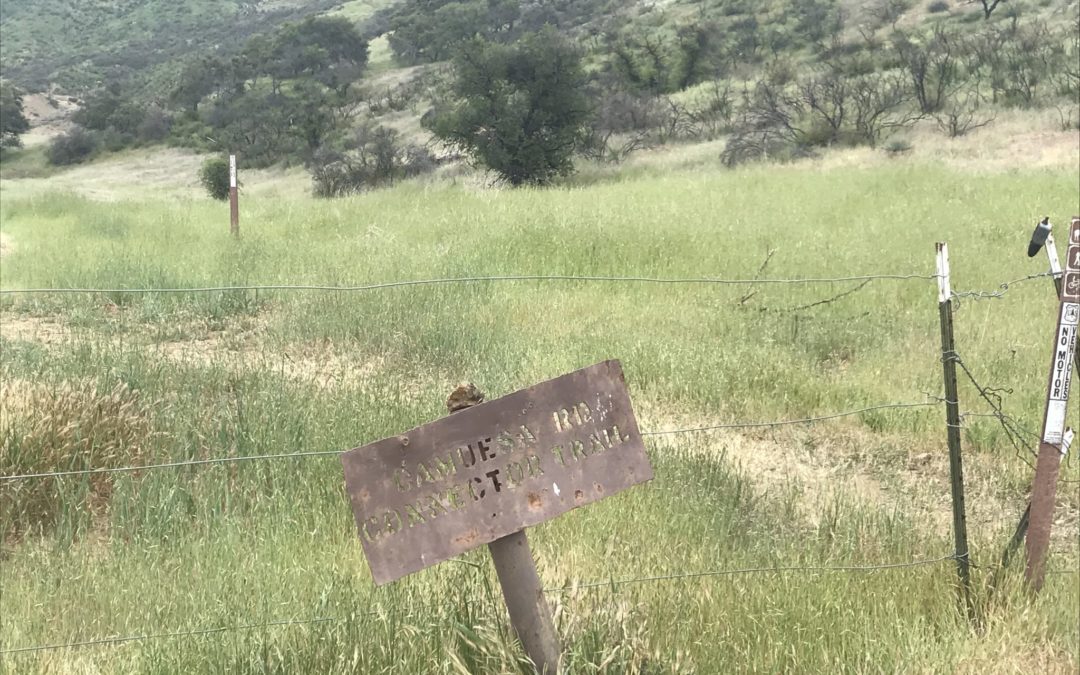 Hello from beautiful Santa Barbara. Ok, it’s actually overcast and muggy at the moment, but it has mostly been beautiful for my stay. I arrived Saturday. My trip has been a mix of athlete meetings, mountain biking, and a secret project I will tell you about later. Suspenseful, no?

I read that Santa Barbara had great mountain biking. My first stop on arrival was picking up the mountain bike I rented.

Two things I quickly found out:

1: I had rented their best full suspension mountain bike. Coming from riding the Ibis Ripley and Mojo… well let’s just say it felt like I had been handed a Walmart bike. But it had two wheels, handlebars and pedals.

2: The mudslides had destroyed some of their prime trails.

The semi helpful guys at the bike shop said I basically had 3 trail options: Elings park in town sounded easy but good for a close ride Sunday. Jesusita sounded like something I probably would be mostly hiking with my bike. Camuesa sounded perfect.

Sunday I was on the trails early, thinking I’d be riding for close to two hours. 45 minutes later I was back at the car, having circumnavigated the Elings Park trails (this includes a lot of time checking my map). It’s a really cool park, but the riding was nothing to write home about. I am sure I just offended the whole mountain bike community here.

I spent much of Sunday working with a couple of my new athletes out here on run form, which was really productive. Some things can only be done in person.

Later that day I scoped out key coffee shops. SB gets high marks on the coffee shop scene. After extensive testing, Handlebar Coffee Roasters is my favorite; The French Press is a very close second.

My Monday athlete plans were cancelled, so I had Monday open. I was excited to try out the Camuesa trail loop. It sounded perfect: a steep 4-mile doubletrack climb followed by 4 miles of fun (mostly downhill) singletrack and then an easy road spin back to the start.

Camuesa is on the other side of the mountains from SB. I Googled directions and scouted the online maps. It was not far in miles but it looked like a slow windy route. I trusted the Googles. I know better. Rookie mistake.

I headed out early in hopes of being on the trail by 7. I had heard it gets hot back there. I don’t appreciate hot. 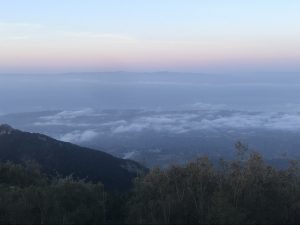 Within 10 minutes I was on a mountain pass that makes our Colorado passes look like the Autobahn. Holy cow, they know how to do scary mountain passes here. I climbed and climbed, winding up the mountain. The views were spectacular, when I was brave enough to look away from the road. After about 45 minutes of white knuckle driving, I reached my key turn. Only 6 miles to go. I turned, and almost ran into the gate that said “ROAD CLOSED”. Crap.

After some closer map inspection, I realized I could keep going and force Google to put me on a different route. The next 15 miles were much easier driving and I was happy I wasn’t going to be too far off my planned arrival time. As Google got me closer, it routed me into what appeared to be an RV resort. After about a mile of windy driving, I reached another gate. Another closed gate. No attendant at that time in the morning so no one to ask. My only option was to turn around.

At this point I finally decided to ignore Google. I could see on that map that I could get close to my destination on the main road. The road ended at – you guessed it – a gate. The river had flooded the bridge and it was impassable. Now I understood why Google had tried to route me the way it did. I wasn’t ready to forgive Google, but I did understand.

I could see that the trail was supposed to start across the bridge, but there were signs on the gate saying the doubletrack road that formed the first part of the loop was closed indefinitely due to flood damage. No rangers to ask that time of the morning either. So, cursing the bike shop, Google, and myself, I headed back to town. Defeated.

On my drive back – an easy 30 minutes via the direct route – I decided I would try to ride Jesusita so the day was not a total failure. Jesusita had some fun sections, I’ll give it that, but at least 50% of it was hike-a-bike for me. After 3 miles of this, I gave up on Inspiration Point (1 mile away) and turned back downhill. As I was walking down a steep technical section, a runner passed me. He said something like “fun ride!” and I responded with a “not sure I would use that adjective”. That stopped him and we started chatting. When I mentioned my ill-fated trip to ride Camuesa, he looked confused and said “I just rode that loop last week”. It turns out you just had to ignore the closed signs and walk across the river. The trail was supposedly in great shape. Damn. But at least now I knew.

I called the bike shop and they confirmed this information. Better late… 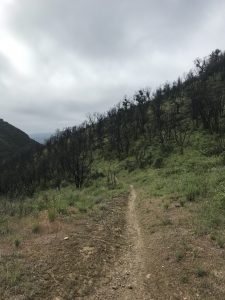 Camuesa: riding through some burn area.

On Tuesday I drove the new direct route to Camuesa and rode the loop. It was just what I was hoping for!

Today I had a meeting all morning, but then went back to Camuesa to ride it again before I turned my Walmart special back in to the shop.

I found a really nice CrossFit gym here and have been going every day. It is a nice community and I always love experiencing different gym culture. I seem to be stronger at sea level. Yea!

Tomorrow I will have the chance to make it to Inspiration Point on the Jesusita trail, on foot. Then I will fly back to Denver in the afternoon.

Plenty of time for a few coffee stops before I leave.