A Chilly Stopover in Moab

Hello from sunny Moab. Sunny but cold. We made it here just in time for the first freeze of the year. But it was snowing in Colorado, so I will stop complaining right now!!

It SHOULD be warmer in Sedona. Weather don’t fail me now: I left all my cold weather clothing at home!

We drove to Moab from Grand Junction Sunday after an early morning mountain bike ride in Fruita. It was chilly for me, but it was above freezing at least! Puck was dragging to start. He must have been dehydrated because after I got his two bottles of water into him, he found another gear and took off, impatiently waiting for me on the more technical sections.

It was a short drive to Moab – my original plan did not include the stopover in Grand Junction but the snow changed that plan. I had to get out of dodge fast and Grand Junction was the only place I could find an open RV spot. 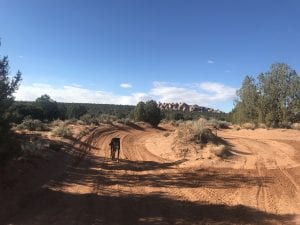 After I set up the Airstream at our lovely Moab RV park, Puck and I drove out to the Behind the Rocks area for an afternoon walk. It was chilly for me, but Puck thinks anything over 32 degrees is torture; I had to forcefully remove him from several mud puddles before he drank too much dirty water. Any port…

I don’t think I have been in Moab since we did Primal Quest Moab (2007? 2006?). While I don’t love the town of Moab, the area is spectacularly beautiful, with amazing trail systems.

This morning it was below freezing so Puck and I opted for a hike instead of a bike ride. We went out to the Bar M trails, quite a neat area. I still froze, but it was better than being on a bike! A raven was taunting Puck for part of our hike; it would swoop down and skim over him then land just out of reach. I could see Puck getting frustrated. He finally made one kamikaze attempt at the bird and slammed himself right into a rock. When he picked himself up, he limped back to me with a sad expression. I gave him the appropriate love, and all was forgotten. Fortunately, he did no serious damage. 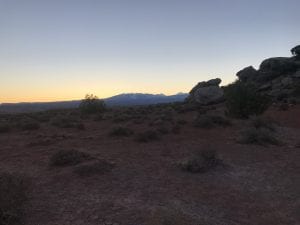 The La Sals in the distance. Waiting for the sun!

After that it was second coffee – so far, the only decent coffee I have found in Moab, from the Wicked Brew drive through stand. Then some work back “home”.

Maya has been sick and not eating. I am worried she has another bad tooth, but she won’t let me look and I’m not ready to lose a finger. We’ll try some soft food before I start calling vets. The poor thing looks so sad. Makoya, however, has been enjoying the double rations.

Amazingly, two transfers and no cat poop or pee on the bed. That might be our new record.

Tonight is supposed to be another freeze, so we may take tomorrow morning off and just load up and head to Sedona. I woke up with a new face full of zits so I guess my body is not yet ready to start forgiving me. I’m trying not to stress, I know that won’t help, but it’s hard.