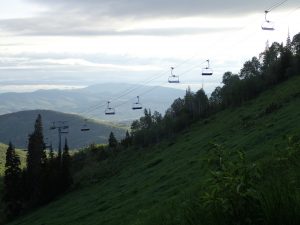 After driving from Sun Valley to Park City yesterday, we had a full day in Park City today. I made the most of it. And I’m still going! We had to hit the trails even earlier than normal because it was quite warm (60 degrees! Gasp). I really wanted to ride a fun 8 mile loop at the Park City Mountain Resort that Puck and I did last August. I didn’t recall any water on this loop, so I played camel. I make Puck carry his pack on warm runs, but I give him a break when I’m on the bike. We scored a pond that I don’t think was there last August when we rode this

loop. Yay! And one creek was flowing. Double Yay! Still, Puck was one hot, tired doggie by the end. We were done so early that we had plenty of time to go sit in the creek.

Then it was on to the 9:00 CrossFit class at CrossFit Park City where I finally met Leslie & Jon! They are friends of Shibby, Grant & Shawna; Grant had been trying to get us connected. It was great to meet 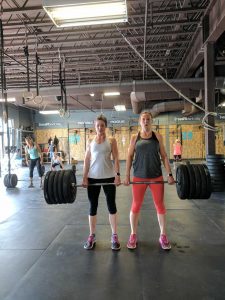 them, fun to make new friends! We managed to chat between rounds of our workout. Today was a partner workout: After 30 minutes of jump rope, push ups, pull ups and running, we had 5 minutes to max out a partner deadlift. I’ve never done a partner deadlift – it was fun and Leslie and I were well matched. I think we made it to 315 pounds. I expect lots of respect when I note that as my deadlift max (I’ll put “partner” in small print…).

After that it was down to Jordanelle reservoir where I had reserved a SUP. I figured if I paid for it ahead of time, I would go do it. Kind of like when my sister and I reserved a snowmobile glacier tour in Iceland the night before… after a fair amount of wine. But that’s a story for another day!

It was pretty windy and the lake was choppy, so I was a teeny tiny bit concerned that my skill level was no match. The young boy who got me onto the paddleboard was a real sweetie, and good at his job for being about 12. He suggested I paddle on my knees. Clearly he took one look at me – hello Grandma! – and thought standing up was not in my wheelhouse. I do have to say it is a lot easier to paddle on your knees.

However, after about 15 minutes, I thought to myself “darn it, they don’t call it kneeling paddle boarding!” And my old knees were getting sore. I found a nice calm cove, with limited boaters. And stood up! I managed to paddle on the choppy water for over an hour, STANDING UP. I nearly biffed it a couple of times in the wake from a motorboat. I’m pretty sure one of the boats was just going in circles around me to wreak havoc…

I was nearly back to the beach, so proud of myself, when a big (it was enormous…) wave hit and I went in with a splash and undignified shriek. Fortunately it was in the zone of maximum picnickers, lots of witnesses.

After that, I was as pooped as Puck. So now I am sitting here having coffee at Hugo Coffee. That’s my recommendation for coffee in Park City – Hugo. They have really good Nitro Cold Brew. And you know how I feel about Cold Brew.

My plan is to move from coffee to beer. I wanted to try the Park City Brewery and it’s just down the road from me. One last beer of the trip.

Happy Fathers Day tomorrow to all you Fathers out there!