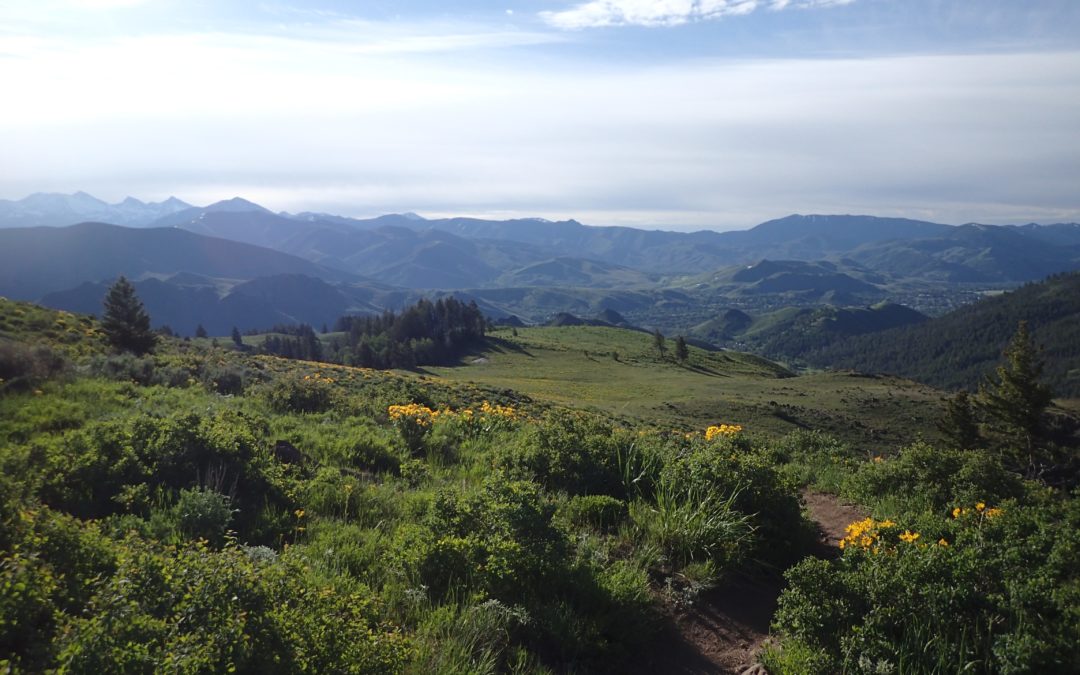 Each of the last few mornings I have expected to wake up to rain, and each morning we are given a reprieve to get out and enjoy the trails. Thanks Mother Nature! 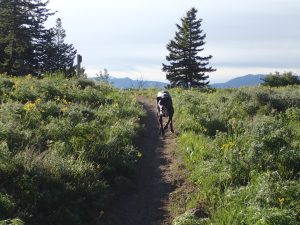 After a full night of sleep – Puck seems to be on the mend thanks to the magic tummy powder – we had a more leisurely start to the morning. It was just above freezing when we got to the trails, but the skies were clear. We had a fun, cool and stream filled trail run. Obviously Puck didn’t get the memo that he was supposed to be tired.

I had my road bike with me because today looked promising for a short ride after our trail run. I headed up toward Galena Pass. I didn’t expect to get there today; it’s not a super long ride, but it is when you have tired legs. And I understand the final 5 miles are quite steep. So I decided I would conquer it in two parts. Today I made it 15 miles up. I hate it when you turn around and realize the reason you felt so good climbing is because you had a tailwind. Which is now a headwind. Buzz kill.

A few miles into the descent, I was passing a trailhead parking area and caught movement out of the corner of my eye. It was a big black shepherd running hard at me from the parking area. Then I saw it had an equally large sidekick right behind it. My first thought: “they don’t look particularly friendly”. My second thought: “holy s*** they are moving fast”. My third thought: “those #$&*%! dogs are going to catch me”. It was at this point that my adrenaline fueled power surge kicked in. Thankfully I was in a big gear so I could hammer; I didn’t have a lot of room for error & it took all I had to pull away from those dogs. They weren’t giving up easily!

I hope a car didn’t hit them. I did try to warn the cars headed toward me after the encounter, which I thought was magnanimous of me given the dogs had just tried to take me down. Their karma was not great at that moment. But I still hope they lived to chase another cyclist. Good unplanned power training.

I felt a little ill once I came off the adrenaline surge. I’m not generally afraid of dogs, but I was terrified of those dogs! 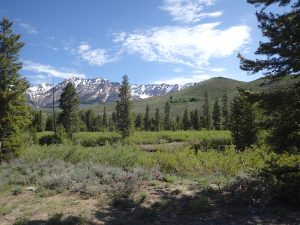 On the road up to Galena

I waited in line for my cold brew behind a woman who took about 5 minutes to order, explaining multiple times that she wanted her cheese and avocado IN the scrambled eggs, but NOT the bacon. She didn’t want the bacon in the eggs. The order taker was very patient. Finally when the woman was sure she had been understood, that the bacon would be all by itself on the side, the order taker told her it would be 30-45 minutes because they were so busy. Oh no, that wasn’t going to work. She was too hungry to wait. After all that order angst she had to go try to find another place to eat! I was trying not to chuckle out loud.

After that, I went to the LaundroMUTT (love that name) to wash everything. I thought about washing Puck, it is a combination laundry/dog wash, but he got to stay dirty today.

Then a little cooking: Can’t have beer & burger EVERY night.

Now it is raining so I can’t sit outside. But if we keep having our beautiful mornings, I can suffer through a little evening rain!