Chip dubbed this CBB: Coach Behaving Badly. That was just too accurate not to steal!

I will start with my confession. I violated my number one rule, which I think I was pretty clear about: NOTHING NEW on race day. In my defense, I didn’t have much choice. And on the one choice I did have, I clearly chose poorly. Let me explain:

Remember 70.3 Santa Rosa in May, where I fell in love with my Altra One v2.5 running shoes? They were awesome and they didn’t let me down on race day. When I was packing for our RV adventure, I decided I would take my Altra Ones and NOT my CrossFit shoes (limited space); I had some strange notion I would do some road running (hello?) and figured I could just do CrossFit in my Altras.

They probably would have been just fine except I did an inordinate amount of rope climbing at the various CrossFit gyms along our trip route. And it turns out that the very soft soles of the Altras are no match for the descent of a rope climb. I basically rope burned the Grand Canyon in the sole of one of my shoes!

3 miles into the run I knew I had a problem. It was clear that the shoe was trying to take my right big toenail off. It was becoming quite painful. Then the shoes apparently rubbed the skin off the top of both my big toe joints. And created blisters on both big toes. At mile 5 I looked down and saw the blood and I knew it was going to be a long run. It was hot, so my feet were also swelling. And when it’s hot you pour as much water as possible on yourself, which naturally leads to chafing. Things were not looking good.

I began to change my stride, trying to alleviate the pain, and by about mile 8 I had a nice arch cramp in my left foot. At one point I passed a woman and a man walking and I heard the woman say “That sucks. Did you see her feet?” Great. I just kept thinking of my little sister who ran her first marathon in a similarly sized pair of shoes and finished with blisters on EVERY TOE. I think she lost most of her toenails. Comparatively, this wasn’t so bad. Or she is just a lot tougher than I am.

I often have to fight off hyperventilating as I close in on the finish. I think it is a combination of the finishing kick – which today was not noticeable – the emotions, and the fact that my body is completely depleted. Today I started sounding like a freight train with over a mile to go. I wasn’t sure I could hold it together.

It was worth it though – at the finish, Andy Potts (for those who don’t know him, he is a very famous pro. Cute too) put my finisher medal around my neck. I don’t have a lot of hero worship, but he is such a darn nice guy for someone so good that I might have a little bit of hero worship for Andy!

Was I happy with the race overall? Yes, I actually was. Minus the hamburger feet. This is a really great course and race venue. I was pleasantly surprised by my swim time. It’s not fast, but it is sadly not that far off what I would have swum if I had been training religiously. Not a great incentive to train, if I’m honest.

I got to wear booties in the swim because the water was below 65 degrees, so my feet stayed warm. Ahhh, warm feet.

They had wetsuit strippers. I love wetsuit strippers. All you have to do is get your arms out of the wetsuit, throw yourself down on your butt and they rip that wetsuit right off you. Sure beats hopping around in transition trying to pull it off with cold hands and cramping legs.

The bike is an awesome course. It has a lot of climbing, which I love. The pavement is great. All the downhills are fun and not scary. I felt strong and like I had at least a solid, if not rocket fast, bike split.

And like I said, the first few miles of the run felt relatively good.

Speaking of the run. Hamburger feet aside. I have decided it is way past time to fix my run. Believe it or not, the run used to be my secret weapon in triathlons. I would come off the bike and just pick competitors off. It was fun. Now the run is more like my kryptonite. I look more like a wounded animal just waiting for the coyotes to close in. I think years of chronic injuries that never quite get fixed (it’s good enough!), ankle surgery and a general loss of mobility have created a situation where no matter how hard I train (when I train), I never get it back. So stay tuned, I have begun formulating a plan, which I will blog about and you will keep me honest. No more CBB. 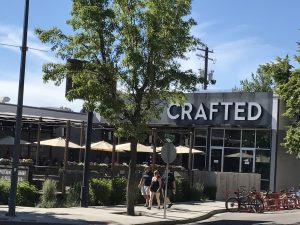 You know the worst thing about post race? Getting into the shower. Because it is then that you quickly discover all the places you chafed.