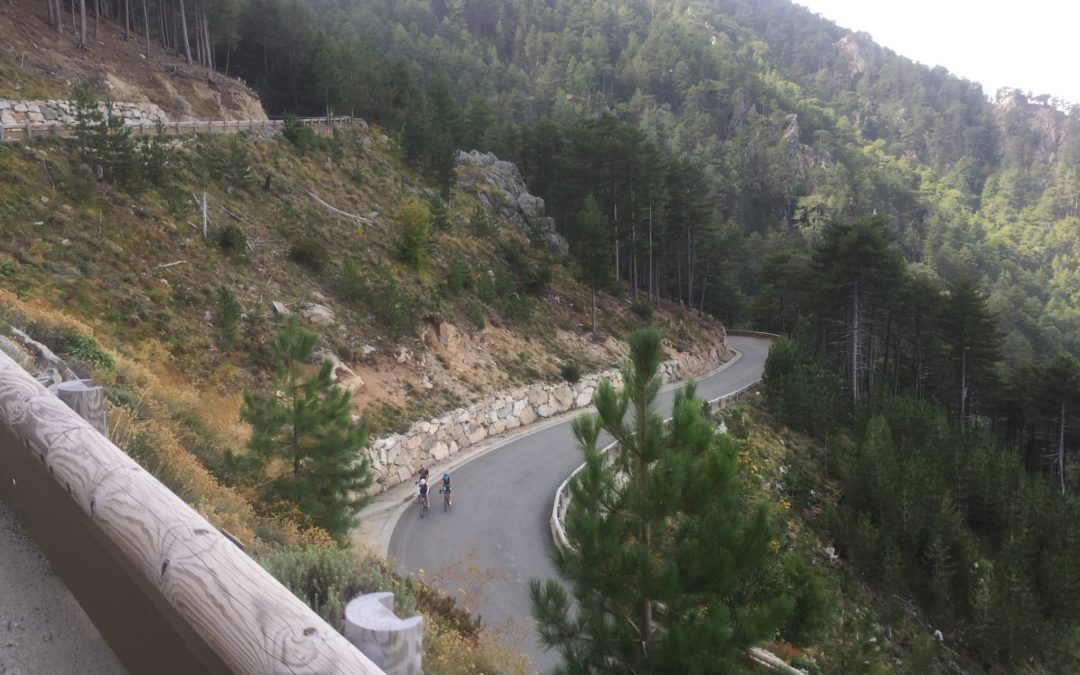 I apologize for dropping off the face of the earth. I was so busy biking, eating and drinking coffee and wine in France that I couldn’t find the time to update the blog!

I packed up the animals and we left Crested Butte for Denver on September 8th. On September 9th I turned 47, which I celebrated by trying to ignore the fact that it was my birthday. Mark and I packed up our travel road bikes for France. Then I packed up my Yeti Betty for her last mountain bike race (her last race with me at least) and shipped her to Vermont where she would wait for me until I got there late in September.

On September 12th I took Puck to “camp” and gave him a big Mom hug goodbye. Leaving him is the only bad part about jetting off to Europe. Don’t tell the kitties, but I don’t miss them quite the same way.

Then we were on our way to France. A quick stop in New York where we met up with our travel crew, Mark’s sister and brother in law. Then it was on to a two-night stopover in Nice before we headed on to Corsica.

We began our vacation in Nice by playing in the sea and pool, drinking plenty of coffee and more than plenty of wine, and eating great food. Vacation was off to a good start.

That Saturday we flew from Nice to Ajaccio, our first destination in Corsica.

Corsica had been on our radar ever since Mark and I did a cycling vacation in Sardinia. We knew it was mountainous; but flying in we saw just HOW mountainous. We soon found out there is no flat in Corsica! 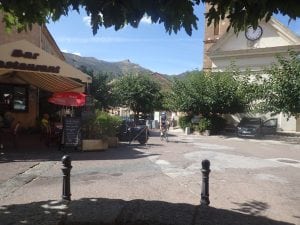 One of many coffee stops

I had outlined a variety of rides based on the CorsicaCyclist website and Mark had mapped them all, so we were ready to go. Our first ride was tame (relatively) and had us riding straight from our hotel in Ajaccio up into the mountains. Being an out and back, we chose to not go all the way to the top of the mountain, but to turn around after a stop for coffee in a cute little town. There are a lot of cute little towns! While having coffee I chatted with a sweet old man. I understood 10% of what he was telling me, and I was able to say less, but he didn’t seem to mind this and we carried on for a while before he ambled off home after Sunday coffee.

I was feeling pretty depleted on this first ride but hoped I would rally in the days to come. Luckily on these trips, the food and wine and coffee stops are equally (more?) important to the riding.

A post ride dip in the sea was wonderful, and even turned up a shy octopus hiding in some rocks. After that it was on to dinner, where we continued our eating and drinking bonanza. 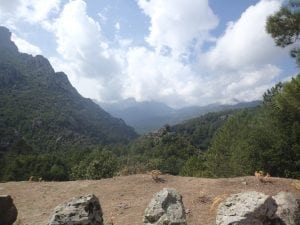 Our day two ride started inland from Ajaccio. Today we would tackle the Col de Sorba, the highest paved Col (pass) on Corsica. Twice. Going up and over then turning around and going up and over again. We were slightly delayed after discovering a screw in our front tire (what is it with me and flat tires these days?), but there was a shop next door to our hotel and they had it patched up and ready to go in less than 30 minutes. 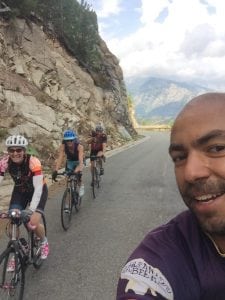 On our climb up the front side, we met Tiago from Brazil. He was on a multi-year world cycling adventure: Cycling the summer months and brewing beer in the winter! His website: https://pedlar.beer/.  Loaded down with panniers he was still much stronger than me. I was leading this climb with the intention of keeping our effort lower (in hopes of surviving this trip), but our pace began to ratchet up as I tried to hang with Tiago. He stayed with us until the climb got quite steep and then he took off and waited for us at the top. We chatted a bit more and said our goodbyes. We descended the back side, turned around, stopped for coffee, then headed back up. We met a large group of goats on the way back up but other than the goats, a few cars and motorcycles, we had the road mostly to ourselves. 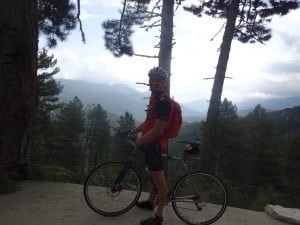 Happy at the top!

Day three was our transfer day to our second destination, Calvi. We stopped to tackle the Restonica Gorge climb on the way. This is where the climbing got real. At one point, we climbed a half km with an average grade of 14%. I was afraid I might tip over. A car stalled behind me as it waited to pass. It was a short ride but stunningly beautiful. The road is a popular tourist route and is about the width of one car, so we were glad to be there in the low tourist season. We decided they paint the center line on the road to let people know that it is indeed a two-way road. Because you could certainly understand thinking it was not. 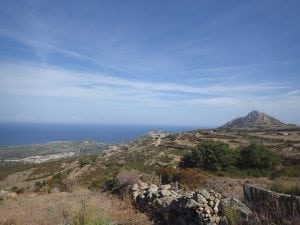 Hilltop view out of Calvi

After that ride, and more coffee, we continued on to our lovely hotel in Calvi. Calvi is a much different city than Ajaccio with more of a tourist vibe. Our two rides out of Calvi were more rolling but never remotely flat. The rides took us through many small beautiful mountain towns. It was hot and humid, but the promise of a dip in the amazingly blue sea and several beautiful pools kept us going each day. We saw a few cyclists each day, but not many. 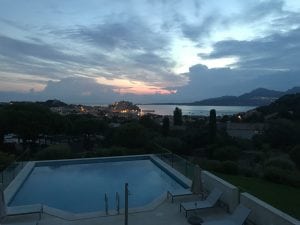 On our transfer day from Calvi to the Northeast area near Bastia, we took a rest day from cycling. After a lovely morning swim, we headed out to our next destination with plans to hike on the way. When we reached our first planned hiking spot, we decided it was too damn hot (30 degrees C or 86 degrees F) and kept driving. We decided to take the scenic route and ended up on a road that was about the width of a sidewalk. It was a lovely route as long as you didn’t meet an oncoming vehicle. In one of the hillside towns we found a hiking trail to do a short hike before calling it good and heading on to our final hotel, which was a lovely quiet place in one of the towns on the sides of the mountain (most the inland towns are on the side of a mountain!). 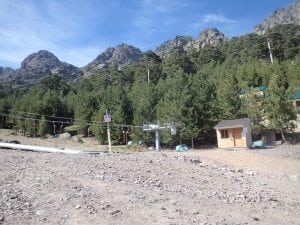 The next day we tackled the climb to Haut Asco, a ski area (yes, a ski area). It boasts 2 lifts and, I think, about 600 meters of vertical in two or three runs. The climb to it was impressive. It was long, and the grade increased as we climbed. It included free range cattle and one little bull who thought he should show the cows how tough he was by scaring the cyclists! By the top, I was out of steam, until I saw Mark motioning to the OPEN café at the top. Coffee!!!

Negotiating with a bull

For our last day, we rode a nice loop from the hotel, through a series of mountain towns. It was a lovely way to end the trip.

Each night we ate amazing food, drank really good Corsican wine and thoroughly enjoyed ourselves. The Corsicans we met were lovely. There was a lot of laughter in our little group.

Corsica has not yet become a serious cycling destination like Mallorca, but I have no doubt it will its lovely roads and stunning scenery. For those who like to climb at least! Even if you don’t want to be on a bike, Corsica is amazingly beautiful and worth a trip. There are plenty of opportunities to hike as well. Or you can just hang out and drink and eat!

We packed up our bikes and the next day we flew from Bastia to Paris. Two nights in Paris was an excellent way to end the trip. On September 26th, we all said our goodbyes and headed off to our various flights. Mark headed home to Puck. I headed on to Vermont to visit my friends and ride the Vermont 50. Mark’s sis & BIL headed home to New York.

More on Vermont in the next post where we will also examine the stages and consequences of overtraining that I am way too familiar with. And you will wonder how someone intelligent, who knows better, who is a coach for Christ sake, cannot stop from digging a deep hole for herself every few years. Perhaps I do this in the name of research; this way I know exactly what NOT to do to my athletes?

It is a mystery.