Crutching in Park City. And a critical review of Slip & Soar technique…

It’s been a whirlwind few days and I haven’t had time to update. So I’ll do the Cliffs Notes update of my road trip to Park City. Really what you want to hear about is the Slip & Soar held on the ski jumps at the Utah Olympic Park. But I’ll save the best for last.

I had planned to run the mid mountain trail marathon this weekend with Grant, Shawna & Chip in Park City. Fortunately I got out of that – phew, good thinking on my part – but I decided I was going to give the road trip a go anyhow. I mean, how hard could it possibly be to get Puck and me to Park City while on crutches?

I packed up the car Tuesday evening so Puck and I could hit the road after PT on Wednesday. It took me a ridiculously long time to pack. I questioned whether this was a good idea multiple times, but I knew I would have fun if I could just get here. I spent Wednesday evening in Grand Junction to break up the drive AND to pick up my hand cycle, which had arrived at the warehouse in Grand Junction just in time for my trip. EXCELLENT!

We stayed in an adorable little house on Wednesday night, with a yard, thankfully. My biggest concern with travel is that I can’t have Puck on leash. That makes walking him in town difficult. We get out so early in the morning that I don’t have to worry then. Off leash dog parks are saving me at other times. Thursday morning, we headed to a dog park early before the heat set in. It was a sad dog park, with no other dogs, but it was attached to a very large park with several ponds and not many people. So I let Puck loose and he did wind sprints for 30 minutes. Perfect!

Then we were off to pick up my hand cycle. It was supposed to arrive fully assembled. However, when I opened it up, it was what I would call “sort of assembled”. Normally it would have been easy to finish the job myself; but in my current hobbled state I knew it would take me a long time (and frustrate the hell out of me). So I headed to my favorite GJ bike shop the second they opened and begged them to help me out. Which they did, bless them. By the time I had gone back to the house, showered and packed, they had it assembled and ready to go.

By the time I reached Park City, I was pretty fried; it was just too much in one day. My leg was swollen. I was uncomfortable and irritable. I was questioning my sanity. But I was here! I got my feet up, packed on some ice and then Chip & Grant & Shawna proceeded to take care of Puck and me for 3 days! Puck adores them all and they dote on him. Everything is so much easier with help.

Friday morning Puck and I went out for a hand cycle ride on some double track trails nearby and then stopped in at the National Ability Center (the amazing adaptive sports center here) to check in, get some info. I was chatting with one of the mountain bike guides and he said they ride some of the serious mountain bike trails around here on hand cycles. Pretty amazing. I am going to have to be a little more adventurous on my hand cycle! 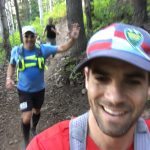 After that, we all hung out and then went to dinner at Jon & Leslie’s (for those of you who followed my RV travels, Leslie was the woman in the photo deadlifting with me on my last trip through PC). We had a great time – it is so wonderful to be around good friends, good people.

Saturday was the race, so I dropped three slightly injured, slightly undertrained runners off at the starting line at 6:30 and wished them luck. We all had our phones, just in case…

I spent the morning hand cycling with Puck, at the gym, drinking coffee. Grant, Shawna and Chip spent it running 26 miles on a trail in the heat and doing some significant suffering! Shawna crossed the finish line first. Grant was not far behind. And Chip rolled in a little after that, having trained approximately 1 week. I was fairly impressed with all three; and secretly glad I wasn’t out there because I probably would have been last.

The race ended right by the Utah Olympic Park. And it just so happens that on Saturday they were holding their annual Slip & Soar. I did not know this until just recently, but they have ski jumps that are basically big ass slip & slides that drop into a huge aerated pool of very cold water. This is for the ski jumpers to practice in the summer. But a couple times a year they turn it into a seriously scary adult version of your childhood slip and slide. It is truly a sight to behold.

About 10 minutes after the four of us arrived and settled in a good viewing area, a man went off one of the bigger jumps, hit the water wrong and knocked himself unconscious. The lifeguards were there in no time and dragged him out, but he was still unconscious and not moving. The crowd was holding its collective breath. Finally he moved and it appeared he could move his legs and arms. Clearly he had done some damage but hopefully it was not permanent. They did cart him off in an ambulance.

At this point I was secretly thanking my knee for being broken so I didn’t have to come up with an excuse not to take my turn on the Slip & Soar.

Grant was the first to go for it. I can only imagine what was going through his head once he reached the front of the line and looked down the long slide. But he executed a very controlled high-flying feet-first landing in the water. No flips, but no flailing either. Decent marks. 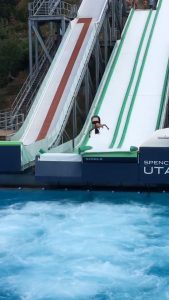 Shawna took the plunge next and kicked it with a very nice front flip and good landing. Rock on girl!

Chip was on deck now. After an impressive launch off the jump, something went wrong. Crazy body contortions followed. He finished with a hard landing that looked like it hurt. Apparently it did hurt, a lot. We are not sure if he pulled something and/or bruised his ribs; but his whole side turned a really pretty purple color. He was not really excited to laugh or cough or really to move. Painful. But the video of his jump has provided endless entertainment; I crack up just thinking about it. Sorry Chip, but thanks for taking one for the team! 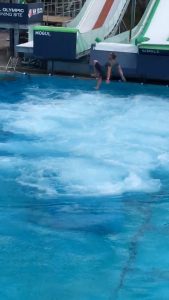 Chip: Houston we have a problem

After that, Shawna and I came back for Puck and left the boys there to take another run. They watched two more guys get carted off in ambulances; Chip wisely decided to forgo a second run. I’m sure the significant pain he was in helped in that decision. Grant made it down successfully a second time.

We finished of a fun Saturday with an exceptional dinner at J&G grill in Deer Valley. We all – except Chip, who was in pain – slept well.

Today is a lazy day. Grant & Chip left earlier. Shawna is here for the initial week of her PhD program at the University of Utah. Awesome!

I’ll be here a couple more days. Puck and I will hand cycle and play in the cool dog park with a pond. And sleep. The old lady here is tired after 3 fun social days!