Let’s start with what went really great today, shall we?

We woke up to sunshine, Puck and I had a great run where he was able to run out some of the crazy. I successfully disconnected, secured, packed up and re-hitched the trailer. Tim, my RV instructor showed up at 7:30 and we were off. He was awesome and by the end of our 5 hours together I was turning with confidence that I wouldn’t take out the bumper of the car next to me. I had driven up and down a canyon successfully. I learned how to back up straight and back into a parking space, which I successfully did all on my own upon arrival at our current abode (Deer Haven RV Park, Saratoga WY!!!). I even got a certificate. Yea, I’m official.

I have to say I already feel really comfortable driving this thing, which is a huge relief. It is small and that helps, but I was a bit worried before taking off.

Back to good things & this one is huge. The cats did GREAT on their first time in the moving RV. Of course, they might have been hanging from the screens the whole time, I would never know, but they seemed remarkably put together each time I checked on them. Now, you may think this is not really a big deal. You have never traveled with my cats. Maya gets legitimately carsick and then has diarrhea for about the first 2 hours before she is empty. Occasionally she froths at the mouth. Makoya doesn’t get carsick but she cries THE ENTIRE TRIP. Non-stop. So you can understand why I was worried. The drive even coaxed Makoya out of the kitty litter, so I guess they are ok with the moving house concept! Halleluiah!

We were doing so well. I left Tim around 12:30, certificate in hand. I purposely made today a short hop to Saratoga, Wyoming (about 170 miles). I was following Google’s suggested route. I had chec 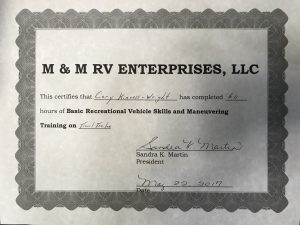 ked it, looked legit. Then we hit the dirt road. 3 miles of impressive bone jarring washboard dirt road. All I could think was “I sure hope I secured the wine” and “if the cats make it through this, we are golden!”. Finally, we made it to 287 and headed north into Wyoming.

It was at this point, about 45 miles from the intersection with I-80 and gas stations when I noticed that my fuel economy estimator said I had 90 miles left. The problem was that it was decreasing faster than my distance traveled. Soon we were down to 50 estimated miles, with 30 actual miles left to go. I was starting to sweat.

Then we hit the first hailstorm. Hail coming down so fast that the road was covered. No problem, I was feeling confident, just drive slowly. We made it through hail to just light rain and wind. Still 20 miles from gas and I’m down to a 30 mile estimate. I’m praying now, which is saying something.

Oh! I nearly forgot. Another good thing – about this time in the trip, I noticed that the Hybrid System Failure warning had disappeared. It un-failed, woo hoo! Self-healing hybrid system, go Volvo.

I did make it to a gas station, it was a very close call and by the end I was trying to coast as much as possible. Lesson learned: Fuel economy sucks when towing 4000 pounds of trailer, must pay attention to gas gauge!

We head west on I-80, only 77 miles to our turn off, then another 20 south to Saratoga. Piece of cake. Hahahahaha. 20 miles later, the Wyoming weather hit hard. Hail, snow, torrential rain, impressive 40+mph wind gusts according to the signs (they only bring out the warning signs when it really gets interesting). Every time a semi would pass me I couldn’t see for a few seconds. This went on for most of the remaining 50 miles. On the bright side, I figure if I can drive through all that, I’m pretty much set for the rest of the trip.

FINALLY, we make it to Saratoga. It is, predictably, raining. The animals are all hungry. Cary is hungry. Did I mention it was raining?

I back in – YES! – I hook everything up in the rain because I am not sure if it will stop any time soon. As I am pulling down the front door step I notice a funny psssssss sound. It’s near the tire, but I am sure it is something else and will go away. Positive. Every time I pass by and hear the psssssss, I ignore it. Until finally I bend down and notice the screw embedded in the tire. Yep.

After a momentary pity party, I call the first shop I see when I Google “Saratoga WY tire”. They happen to be just down the street and after some sad begging on my part, they say they will find someone to send down, take my tire off, fix it and put it back on. Bless you small town people! Marty showed up a few minutes later, in the rain, and took care of it all. For $45!

It is beautiful here, we are right by the Snowy Range in Wyoming. We are hopeful that it will clear in the morning.

Tomorrow we move on to Park City where will spend 3 nights and hopefully dry out. I’m not going to check the weather forecast. The last time I checked it was supposed to be sunny. So it will be sunny.