So many trails! And… Jeff & Jenny next door come to my rescue.

As I sit here staring at the trail map, I feel like a kid in a candy store. I will do this one, then this one, then… Hyperventilate. Hyperventilate. Then I remember that I’m not 30 anymore. Chill out, Cary, you don’t have to do everything on this one trip. Don’t get me wrong, I’m not giving in, but I am trying to be more honest with myself about what my body can handle at my advanced age.

But the trails! Oh the trails. Not to mention the road riding options I haven’t even touched yet (maybe tomorrow). I need a second body I can swap out when this one gets tired. 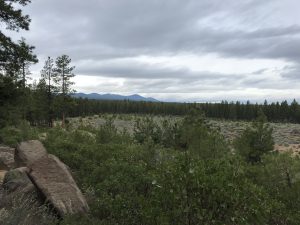 So far my impression of the Bend trails is that they were pretty much built with me in mind. Now, I have not ventured onto the black and double black diamond trails, but the blue trails are pretty much made to order for Cary. And there are a lot of them! Flowing single track, minor technical sections (it’s a stretch to call them technical, which is just fine by me). There hasn’t been a lot of climbing yet, but the future rides I am eyeing may fix that. I like to climb; I am from Colorado after all. I’m not complaining though; climbing or no climbing, Bend has beautiful trails.

I should add that even a hard-core rider would enjoy these easier blue trails; they would just go faster. The flowing single track has countless perfect curves, which I take at my old lady pace. But you could really rip down some of these trails if you were so inclined. They wisely make the really good ones one-way trails!

This morning it was clear that the Monster (a nickname I forgot to mention) was not 100%. I took him on a shorter ride; he needed something to get the bad beans out. He definitely seemed to perk up after a few stops in the bushes. If only he understood cause and effect: Could it have been the two bowls of cat food he downed in several seconds? The unidentified object that he was willing to guard and then swallow whole so I couldn’t get it? The petrified horse poop? Unfamiliar bugs in the river water? It’s a mystery. There has been a fair amount of groaning coming from the dog bed area… but he ate dinner and that’s usually a sign he’s on the mend. 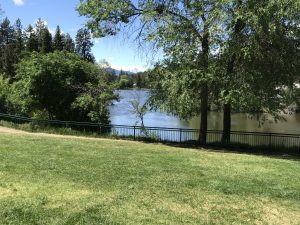 Bend has beautiful in town parks too!

After I dropped him back at the car, I went out for a second longer loop. It was cloudy and cool this morning with a few sprinkles at the end of my ride, but it was a great morning nonetheless!

I found a new coffee shop that wasn’t the one I was looking for. And now I can’t remember what it is called. There are so many! Their cold brew was good. For third coffee I ended up at Backporch again. It just happened to be on my way home, how could I not? 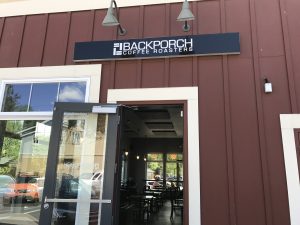 Now, Jeff & Jenny: This evening, I was sitting here doing a bit of work when I looked over and saw an Airstream identical to mine had pulled into the spot next door. I also noticed it had these funny feet coming out from under it. Note that the folks I rented this thing from didn’t exactly give me a comprehensive lesson. It was more like “it’s easy, you will have fun, bye”. I read the whole manual, but I can only remember so much. ANYHOW, I hadn’t really concentrated on it until Bend, but every time one of us moves – even the cats – the trailer rocks quite a bit. I figured that was normal, but it did seem like a design flaw. Maybe I should tell Airstream.

So when I saw these funny feet sticking out from under the trailer next door, a lightbulb turned on, dimly, but on at least. I wonder if I have those, I thought? I ran outside and casually asked the guy (Jeff) if all Airstreams had those things? Well it turns out they do, and it turns out they are stabilizing jacks, and it just so happens that now that I have them down the trailer does not rock anymore. Funny, that. Jeff, Jenny and I had a good chuckle at my expense! They are from Eugene and just bought the same trailer I have. My lucky day! I would probably never have figured that out on my own. And I would have felt really stupid when I called Airstream to report this obvious design flaw.

Puck and I are relaxing on our front porch with a glass of wine.