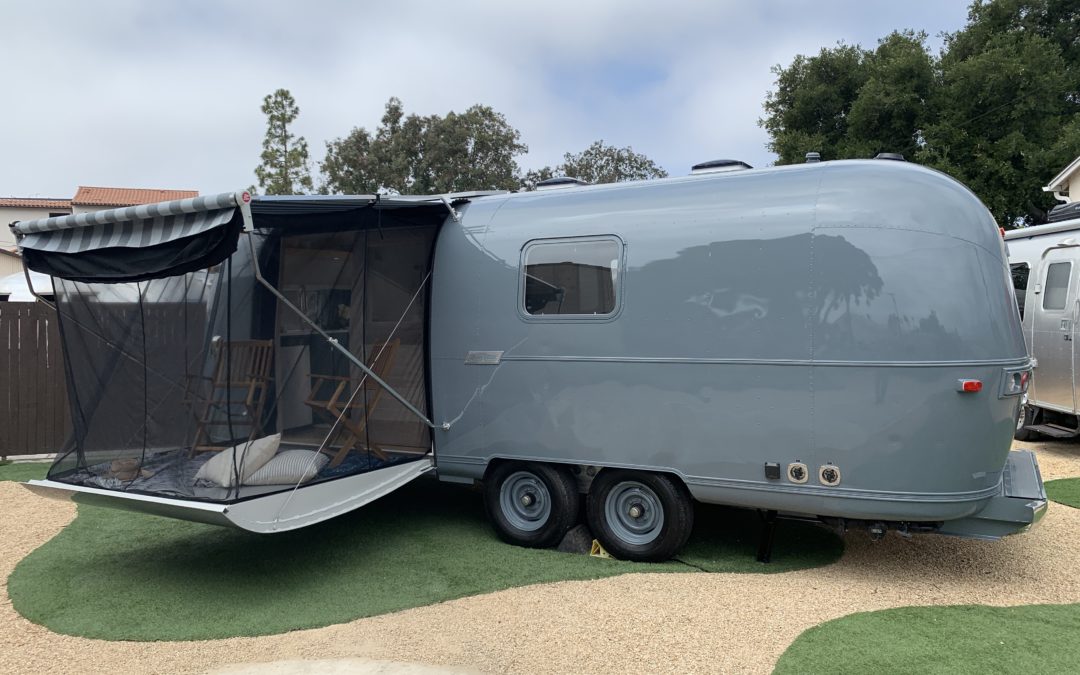 Alice is my new, absolutely amazing, now slightly broken thanks to Cary, Airstream! More on that later.

You now realize that there is no question this is a bona fide life crisis. But in my defense, Alice the Airstream has been under construction for 18 months. It just so happens that she arrived when I really needed her.

Let me back up.

If you have followed me, you know that I have been on two Airstream adventures in rented trailers. I would have never believed I would enjoy this traveling style, but I surprised myself by loving it.

I also realized that the standard designs just did not work well for one person, two cats and a dog (now one person, two dogs and a cat). I made it work but there was a lot of space engineering. Where the hell do you put a litter box? Not to mention a 90-pound dog? So the logical decision was to have one made just for us. Ok, maybe logical is not the word, but it WAS a decision.

I researched custom Airstreams and decided to work with Innovative Spaces in Santa Barbara. Nate (owner) may wish he never met me, but he has been terrific and has held my hand as I get used to Alice. And break her. We’ll get to that.

Nate’s first question when he found the 1973 shell that would become my trailer, was what to name her. My first thought was Alice – my grandmother’s name – because she and my Grandfather, Dudley, are truly the reason I love to travel. They patiently took us all over the country as kids. I don’t know how they survived my sister and I, but I am so thankful they did.

Like my Grandmother, Alice is beautiful and tough (thankfully). Nate did an absolutely amazing job and she is everything I wanted. She feels like home already. 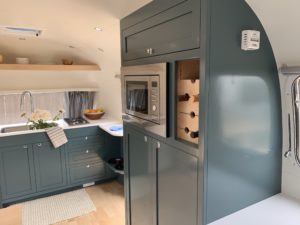 Staged but she really is this beautiful!

Alice was delivered in early June, a just in time delivery for the Flying Circus road trip I had planned starting this past Monday. Now that I’ve caught you up on life, I’ll keep you posted on our trip. We are currently in Jackson, WY. The weather has been spectacular, and we are getting out on the trails. I am slowly getting some of my mojo back, I’m seriously out of shape, but that will come.

Fun on the trails!

The pièce de résistance of Alice is the Gullwing Deck that Nate engineered and built. It is amazing. At least that’s what I have been told (and I do have photographic evidence that it is amazing).

I texted Nate yesterday to confirm that all I had to do was press the OPEN button on the deck. He assured me that was it. Unfortunately, I did not realize it was possible it would stick initially because the seal has to be so tight.

After alerting my neighbors that I was going to unveil the deck, I went inside and pressed OPEN. I heard the gears working, but nothing seemed to be happening. I held it for a while, thinking maybe it just had to get to a certain point before the door actually opened. Nope. So I called Nate. After pressing CLOSE until the motor stopped and then pressing OPEN again and slamming my body against the deck, she opened. AWESOME!!

When the cables were fully extended, I thought I had it made. And then, the unthinkable happened: The deck slammed to the ground. This is not supposed to happen, clearly. My neighbors and I shared a knowing look of “Oh crap”. And then, once again, I called Nate.

When I had pressed the OPEN button the first time, the cable had been unspooling (unbeknownst to me), but it was loose because the door was not opening. Then when I pressed the CLOSE button, the cable respooled, but it kinked itself because it was a jumbled mess. Then when the weight of the door hit the previously kinked portion of the cable, it snapped. Yep, I had just successfully broken the door that Nate had pretty much fool-proofed.

If you have every driven into your garage with your bike on top of the car, you know that feeling when you hear the sound and two seconds later you realize what happened. That’s exactly how I felt when I saw the deck hit the ground. There was no manual back up, so no way to get the deck attached back to the rest of Alice. Big problem. I won’t lie, I went into full panic mode.

Nate and I realized that the only solution was to have someone bolt the damn thing on the frame to get me through this road trip. So today I watched as a guy drilled holes into beautiful Alice. He didn’t have the right tools, so we got enough bolts in to hold it for a while, but since it would be catastrophic if it fell while driving, I have an appointment with a metal shop in Boise on Monday morning as we pass through to put some heavy duty bolts in.

Immediate crisis averted. But I won’t get to enjoy my amazing deck this trip! And sometime this fall I will be taking a trip to Santa Barbara so Nate can fix Alice (and install a manual backup).

I think (hope) things will go more smoothly from now on. We head on Sunday to Boise, then Monday to Bend. I have wanted to go back to Bend since my first Airstream adventure, so I’m excited to spend about 10 days there.

More as it happens!