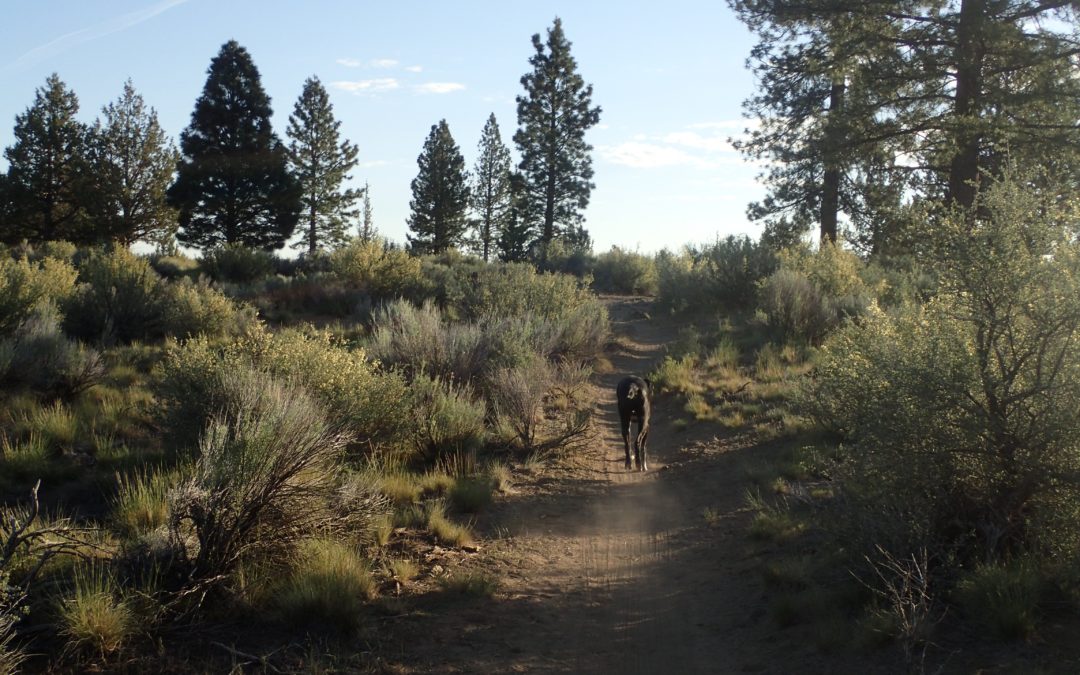 Our first full day in Bend and no complaints. Ok, that’s a lie, a couple complaints but they have nothing to do with Bend itself. Bend is really cool. But let’s just dive right in to complaint #1. The RV resort powers that be made me take my screen shelter down. I asked them THREE times before I put it up to make sure it was ok. No problem, they said. Well I guess the BIG BOSS had not cleared it because today they said I had to take it down. After all that trouble to find one that worked – way to rain on my parade. Bastards. 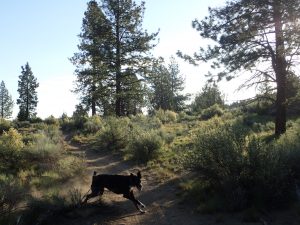 The day dawned clear and beautiful. Puck and I went for a hike on some trails nearby. It was chilly but beautiful. Puck found some interesting petrified horse poop. He’s not usually interested in poop, but this was obviously finely aged…

I need to find a good map and figure out which mountain is which in the distance. Geography, not my strong suit. I’ll work on that! There are at least 3 I can see but I need to stop and count when I can see them all. Feel free to chime in.

I wanted to do the Memorial Day CrossFit workout, “Murph”, named after Navy Lieutenant Michael Murphy who was killed in Afghanistan in 2005. This was one of his favorite workouts. So at 9:00 I went to a nearby CrossFit gym. It was packed, lots of good energy! Murph is 1 mile run, 100 pull ups, 200 push ups and 300 air squats, then another mile run. Some crazy people do it with a weight vest.

So here’s complaint #2 and then no more complaints. As we were getting ready to start the workout, this guy came up to me and, without preamble, asked “How OLD are you?”. He asked it in a way that indicated he was worried I might have a heart attack or break a hip. Granted, I had to think for a minute before I told him I was 45. His response “wow, good for you!”. Is 45 ancient? Do I look ancient? Maybe it was the old lady sunscreen application (white face, you know the look). But who asks that of any woman? Stupid man. I kicked his ass in the workout, just for the record.

After Murph, I ran some errands then I took Puck to an off leash dog park with river access. I wish I could have captured it on film, but I had my hands full. Puck is fascinated by other dogs but not always sure how this thing called “play” works. Today he was completely captivated by a Border collie playing fetch. As the Border collie was waiting for his owner to throw the ball, Puck would run up and stand over the Border collie, just stand there staring at him like he was waiting for the show to begin. Then he would run after the Border collie running after the ball. I don’t think he ever really understood what the game was. He was a little scared of the river because it was rocky, but he did eventually wade in a little bit. Pretty much everyone was cheering him on at that point. If nothing else, Puck does attract attention. Now he is completely pooped. Mission accomplished!!

So… CrossFit. I’ll come clean and admit that when the CrossFit craze started years ago, I was one of the biggest skeptics. Just another gimmicky workout craze that would die as most do. I didn’t really understand what it was so I had no business bashing it, but that didn’t stop me. Then in 2013 I took the Level I training course with my friend Carrie. A CrossFit gym had just opened in Crested Butte so when I was there I did the workouts. I got hooked pretty quickly, but wasn’t really consistent with it until the last couple of years. CrossFit is basically a mix of Olympic lifting, gymnastics, bodyweight strength, kettlebells, medicine balls and random stuff like rope climbing. Every day is different. I can do things now I never thought I would be able to. Every day is challenging & intense. I never walk away thinking I didn’t get a hell of a workout!

Basic CrossFit lingo. Clearly, this sport was started by men.

WOD = workout of the day

Rx = doing a workout with the prescribed wait/rep scheme

There are a bunch of set benchmark workouts. Some are called Hero workouts, like Murph, and are dedicated to a fallen soldier (the guy who started CrossFit was ex military). Some are the Girls, named after various women who CrossFit.

CrossFit has turned into its own sport and the top athletes in the sport are scary strong. Picture strong man/woman contests. Muscular dudes and ladies doing crazy things. But most of us are just regular folks.

I realized several years back that I always felt immensely better when I was doing CrossFit regularly. My body moved better and my energy was better. It is so different than the endurance sports I do so much of and I think it was what my body needed. I am stronger now at the (apparently ancient) age of 45 than I have ever been. The first time I did a handstand, I actually jumped up and down with excitement. I can climb ropes, I can do pull ups, and just watch me fling that barbell over my head. I’ll never be strong like the top CrossFit athletes, that’s not my goal, but where I am feels good. I don’t see me giving up this addiction any time soon.

That’s a wrap for today. Puck and I are sitting outside under our – oh wait, we don’t have a shelter anymore. Over it.