ON THE MOVE: From Star Pass to Park City! 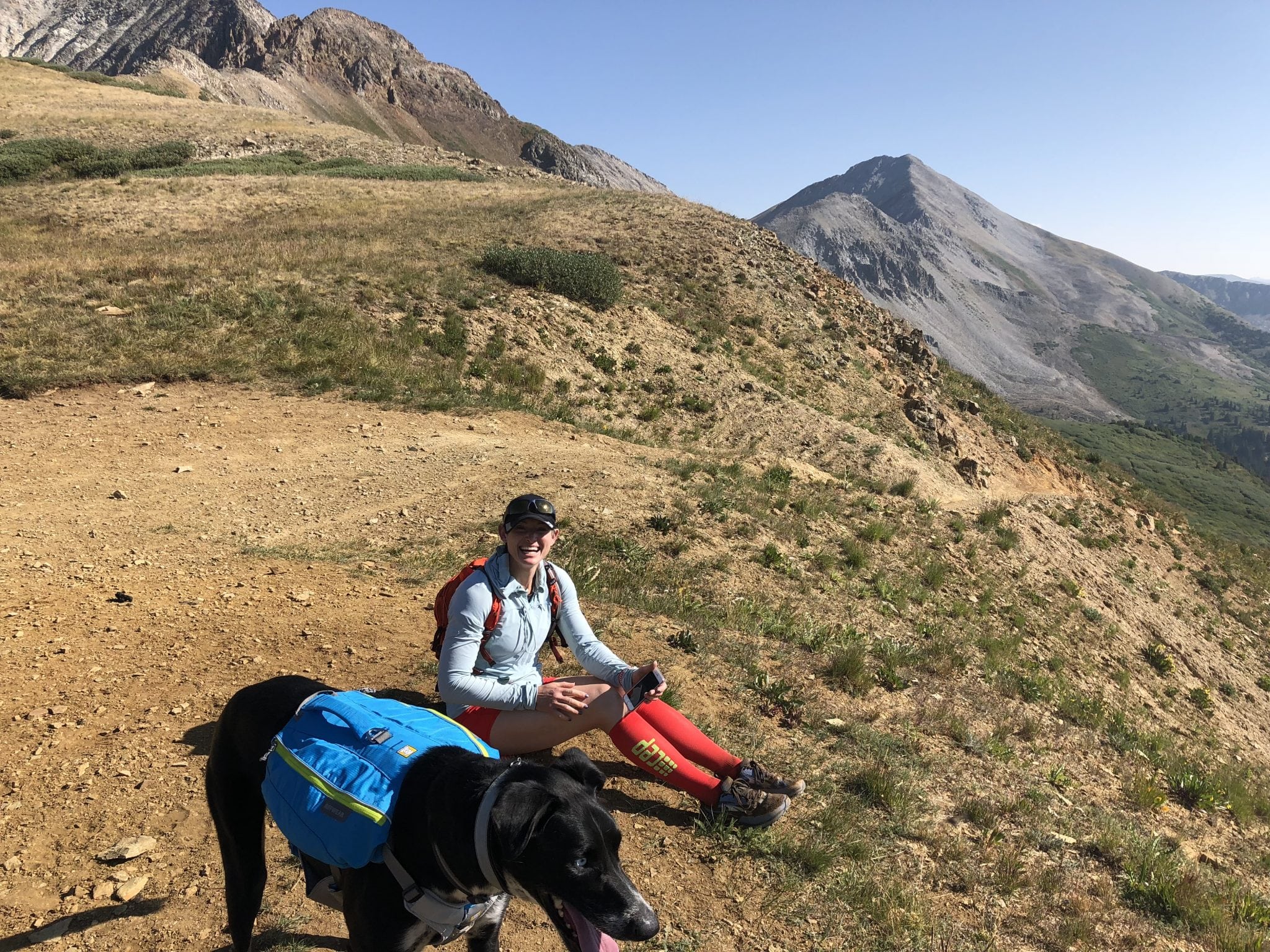 I am writing this from one of my favorite coffee shops in Park City (which has the added bonus of allowing dogs!). For those of you who know Puck, picturing him sitting quietly at a coffee shop is probably hard to do. He’s getting the hang of it, but yesterday something startled him, and he tried to drag the chair he was attached to across the room to the exit. Luckily, he’s cute.

Why am I in Park City? I was supposed to be here last week to help coach at a paratriathlon camp and my plan was to stay on and play; when the camp was canceled, I decided I should still come to play. I have a free place to stay (yee haw) courtesy of my friends Grant & Shawna who bought a house here a year ago. They aren’t here but hopefully they will be soon!

I should back up. The past few days have been an adventure. 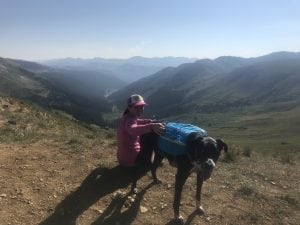 My teammates at the top of Star Pass!

On Thursday Alexis and I (and Puck!) ran up to Star Pass near Crested Butte. This is important because it is the big climb in the 40-mile run Alexis and I are doing on September 1st (the Elk Mountain Grand Traverse). There is a time cutoff in that race at the top of Star Pass; we wanted to know what we were dealing with. With my excellent route mapping skills, I estimated it was about 9.4 miles to the top from where we started running. It wasn’t. Depending on whose watch was more accurate, it was between 10.5 and 11.5 miles. But we made it to the top in just under 3:20. That was good. In the race, the top of Star Pass is at 17.75 miles in and we have 5:15 to make it there. We are both determined to make that cutoff!

By the time we got back to our car, having covered somewhere between 21-23 miles (let’s call it 23), the three of us were happy but pooped.

On Friday I coached the morning CrossFit classes, then Puck and I jumped in the car and headed to Park City.

I mentioned that I am staying in Grant & Shawna’s new house (which is awesome). The house is unfurnished, but they bought the basics I would need & they even sent me my own key. Some demolition work was going to be in progress; but it would be upstairs and we would be staying downstairs, no problem.

On Tuesday Grant forwarded some photos from the demolition work, just so I would know what I was dealing with. The first thing I noticed is that it appeared the kitchen was the central part of the demolition. I thought it would be odd if there were two kitchens in one house but… maybe? I sent an email just confirming what I was pretty sure I knew – note that they had literally just had their second child – but immediately added all my camp cooking gear and coolers to the packing list! And just in case… I threw in my sleeping bag.

We drove straight here (ok, there were multiple coffee stops and a healthy dose of Advil) and made it to the house around 7:30 Friday evening. When I went to unlock the door, my key wouldn’t go in. It seemed like the right key, but it wouldn’t go in all the way. There was a key box near the door, so I texted Grant & Shawna to a) make sure I was at the right door and b) see if they knew the key box code. It is the contractor’s key box, so they started emailing the contractor and anyone else they know with a spare key. As they are doing this, I noticed the contractor had left one small window open. At first I wrote it off, too small, NOT a good idea. Then I decided I needed to try. As I was wedged halfway in and out of the window with neither foot on the ground, I had a moment to wonder if this was going to end badly.

Thankfully I managed to slither down the inside wall and reach the floor. I was in! Covered in drywall dust but in! I noticed the fridge and microwave had power – BONUS! But then I noticed the downstairs did not. Grant steered me to the breaker box and after one failed attempt, and more panicked texting, I managed to turn on the correct breakers and power our room. By the time we were unloaded, it was late (way past my bedtime) and time for a glass of wine! I decided Saturday would be an easy “get organized” day.

Saturday was also Puck’s meet and greet at the daycare. I wanted a place to leave him part of the day because he can’t sit in the car and I was worried he would be too stressed with the demolition noise. The daycare is conveniently located across from the CrossFit gym I like here, so I decided I should just do the 9:00 class. It was a beast of a workout, but I felt better for having done it. After coffee and a muffin, I headed to Walmart to stock up on necessities. They have a lot of cheap crap at Walmart. Wow. I guess I don’t shop there much. ANYHOW, I got our room all set up. We were ready for our week!

After picking up Puck from daycare, we headed to the Apple store about 30 minutes away to buy a new iPad, my old mini finally gave up the ghost. Puck got to come with me into the mall and hang out in the Apple store. I was a little apprehensive because Puck is a bit neurotic around that many people, but soon Puck was the hit of the store. New mini iPad in hand, we drove back to Park City and went to our favorite dog park with swim pond. Puck, my little water dog. 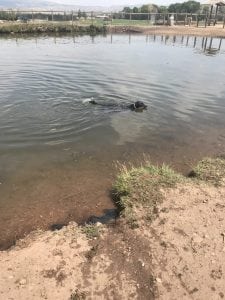 In his happy place

Sunday, I loaded up my bike and we headed to the trails. First Puck and I did a loop on the Flying Dog trail complex. It’s pretty warm here and there is no water, so even with a pack Puck can’t go too long. An hour and he was ready to be done. After that I tried out another loop (Rob’s trail) on my own. It was fun to explore some new trails.

Today I did early CrossFit then dropped Puck at daycare for the morning while I rode the Flying Dog, a great 17-mile loop. Although I had forgotten just how long the switchback climb is. Or at least how long it feels. Stella had developed a pretty good creak by the end of the ride – I was concerned that maybe I had indeed damaged the frame in my first couple of crashes. But a quick trip to the bike shop confirmed it was not the frame but some creaky bolts. The guy tightened them up and hopefully no more creaking.

Tomorrow is another fun day for us. Maybe we can squeeze in an afternoon beer. I wonder if they serve underage dogs, because Puck likes beer!