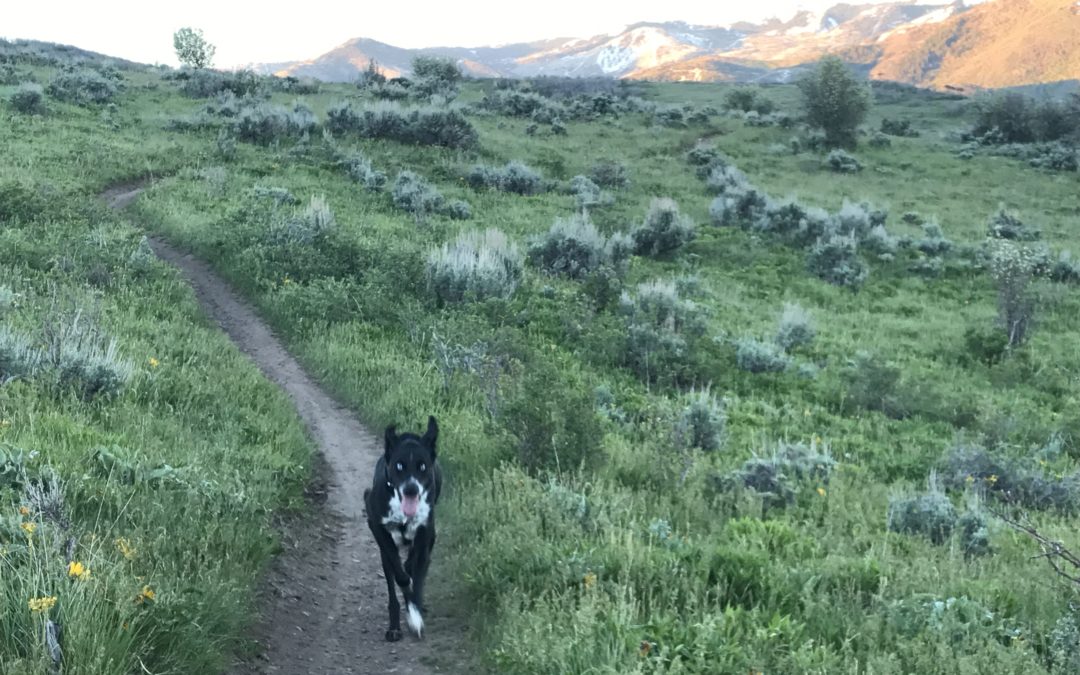 We had a great day in Park City: Early morning run on the start of the (appropriately named) Flying Dog Trail. Park City takes its trails seriously. They are generally awesome and in great condition. We managed to scare up a moose. Fortunately, said moose ran the other way. Next up was CrossFit at Park City CrossFit, where I felt like I fit right in – a good group. It felt nice to move my old lady joints! Then I did some bike maintenance – my trusty steeds were a little sad after the hail and rain, but hopefully they are happier now.

Why are you just standing in the water, Mom?

A dip in the river with Puck – definitely early season run off, but it feels good once your legs go numb!

I successfully cooked my first batch of food. It’s a little tight in here, but it works. If I can fit it all in the refrigerator I should be set for a while… 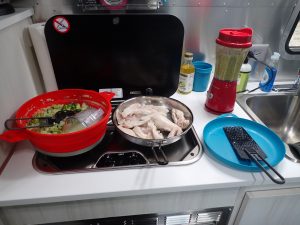 The wind blew in a quick rainstorm, followed by a lovely rainbow.

I thought it might be fun for you to meet the cast of characters on this trip. You know me already, but the other members of the cast are much more interesting. We will start with Puck:

Born 7/15/2013 in Duluth, Minnesota at a sled dog racing kennel. Parents are two accomplished sled dogs. He had 6 sisters and 1 brother, Ninja (he died at the age of 1, running). Puck bunked with one of his sisters at the kennel and we are pretty sure she had a hand in getting rid of him.

We adopted Puck in April 2014 when it became apparent he was not going to make the varsity squad. The verdict – he runs funny, and his rear knees don’t extend. Knowing what I know now, I would still have taken Puck, but I might have been more prepared for what was in store.

At the beginning, Puck was scared of EVERYTHING. When I picked him up in Duluth he tried to run away, with a terrorized look on his face. On our drive home I had to carry him through doorways (he’d lived outside, so he didn’t know what a doorway was!), into the elevator, pretty much anywhere new. He wasn’t small then at 75 pounds.

He was officially released from the leash February 2016. I was a nervous wreck. If there is one word to describe Puck, it is ENTHUSIASTIC. Enthusiastic, but uncoordinated. Every time he leapt without looking, my heart almost stopped. It took me 6 months before I didn’t cringe every time he did one of his flying face plants. He does a lot of them. He loves snow, he loves water; he would prefer if there was snow and water all the time. He hates the heat. Being 90 pounds with black fur doesn’t help. Luckily I hate the heat too!

He is the best trail dog and the first dog I have had that can be off leash. He is too scared to let you out of his sight and he does actually come when called, most of the time. He loves other dogs, but he has problems with social cues so he approaches with his fur standing on end. I think it is because he is inherently frightened of anything new. Once the other dog gives him the ok, he goes insane; often he drives the other dog crazy within the first minute.

He loves to run but he is the slow kid on the playground, the last one to be picked for kickball. He sure tries hard. I love to watch him chasing his fast dog friends. He has figured out that he can’t catch them, but he CAN knock them over as they fly by!