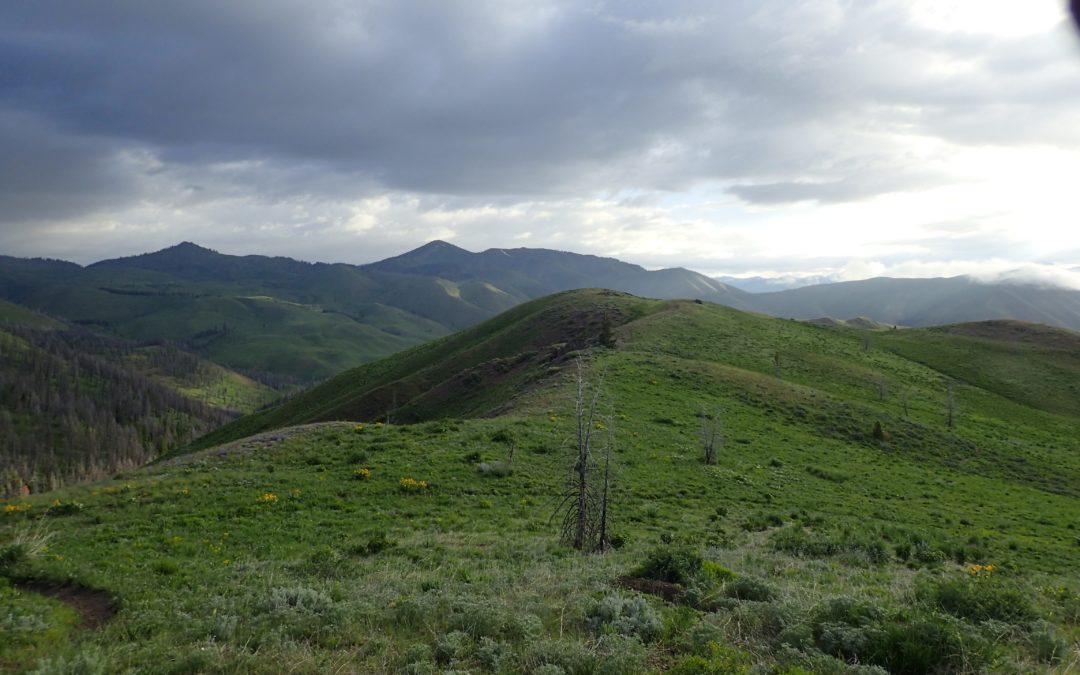 Puck was a sick boy last night; he can’t seem to shake whatever is swimming around in his gut. I’m sure it doesn’t help that he ingests new bugs daily. So it was a restless night for both of us; it could have been worse, I remind myself. We’ve had much worse.

This morning I broke out the magic Tylan powder, which is the only thing that seems to work when Puck gets this sick. The problem with Tylan powder is that it tastes bad (hard to taste bad to a dog, but they managed it), so I need to dissolve it in lots of yummy food. He LOVES his food. This morning he wasn’t interested at all, which tells you just how bad he felt.

We woke up to ominous skies and 35 degree temps. I wanted to get Puck out for a little exercise in hopes of a) clearing his system and b) making him hungry. So I put on every piece of bike clothing I brought and we headed out to our planned trail. I figured I would take him for a short ride, see how the weather was and possibly go back out solo to do the originally planned loop.

Puck took off like a dog possessed. I knew he would slow down quickly. Only he didn’t. 2 miles in and he was impatiently waiting for me as I tried to ride faster uphill. 3 miles. 4 miles. At that point I decided the damn dog would do the loop with me. He made me feel like a real loser for my recent poor race performance. 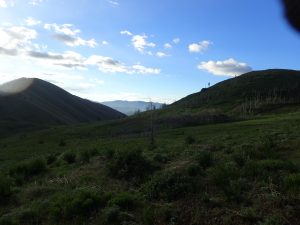 We lucked out on the weather; it was blue skies in one direction and scary looking storm clouds in the other. It stayed chilly. No rain or snow. We had some amazing views at the top.

I had the map and I knew the exact mileage to our turn for the loop. There are a lot of trails up there and I didn’t want to take a longer one. A little past where I expected to see a trail, I saw a trail. It had lots of bike tracks on it, but no trail sign. We were 6 miles in, so turning back meant 6 miles more and not all downhill. My planned loop meant 5 miles all downhill. If I could find it. I could see the trail continue on but couldn’t see any trail signs. I studied the map; the turn seemed to fit the contours. I was torn. Puck was starting to look worried. I decided to take the trail, thinking we would turn around if it didn’t seem right.

In about half a mile we had looped back onto our original trail. DAMN. At this point Puck was actively campaigning to go back the way we came. He understands turning around and heading home and he thought that was a pretty good idea right now. But I knew that the BIG CREEK was on our loop and I really wanted to get him to that creek. So after more hemming and hawing, we kept going. Downhill. Which is always concerning when you think you might have to turn around and go back uphill. At this point, we had been out for 1 hour and 45 minutes. Puck can go 3 or 4 or hours when I’m on foot, but being on a bike on a downhill course means he has to work really hard. Not to mention that on the uphill he covers a lot more distance then me because he is constantly exploring. And he was sick and probably dehydrated!

He wasn’t that thrilled with my choice to keep going; I wasn’t either, thinking we might be lost and I was going to kill my best buddy. But he soldiered on, still strong. Another half mile down the trail I saw a trail sign. Huge relief! Especially because it was the trail I was looking for.

Within feet of turning we were following the creek all the way down. SuperDog heaven. At this point I think we both just wanted to get down. The weather was looking more ominous, I was cold and he was ready to be done. I let him set the pace and he went for it. We stopped every mile or so for him to lie in the creek, then he would take off like a shot.

We always joke that Puck would never have made it as a sled dog – even without bad knees – because he is not a pure runner. Not like Bob (Puck’s predecessor), who loved running just to run. Puck loves to run to frolick, to explore; I think what keeps him going is that he is afraid of being left behind! He’s a good runner, don’t get me wrong, but he is also 90 pounds. Not exactly the physique of an endurance dog.

But he was a runner today. Whatever was driving him (car, must get to the car), he was on fire. Maybe he was trying to run away from his problematic butt, I don’t know.

We made it to the stream crossing he had scouted for us yesterday. I wisely had us do the loop so this crossing was at the end. There was really no way to avoid wading through. COLD TOOTSIES!

Once I got Puck in the car he did not move. I WAS able to spoon-feed him his food with the magic powder in it. He was hungry – yes! – Just unable to stand up to eat like a normal dog. And he likes eating off a spoon. He’s not spoiled. Nope.

I had missed my planned CrossFit class because of my unplanned route finding issues, so I decided to swim at the YMCA in Ketchum. It is a very nice facility and the pool felt saline. I don’t smell like chlorine, halleluiah.

Then I found the only cold brew in town; which also happened to be very good. My new go to coffee shop: Java On Fourth in Ketchum. I feel like my stay in Sun Valley is now perfect.

I should say that the loop we rode this morning was a great trail. Tough climb. Fun descent. We might have to go back.

Puck’s appetite was back this afternoon. I’ll keep the magic powder going for a week or two. Paws crossed we sleep through the night. 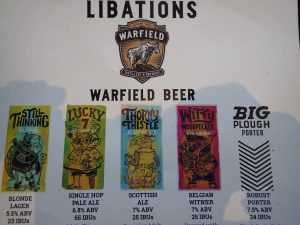 It was cold and windy today, but now the sun is out. The next 3 days look unsettled. Tomorrow we’ll go short; even SuperDog needs an easy day.

I decided to come back to Warfield for beer and burger. I was out of food. Sort of. Ok, it just sounded good!