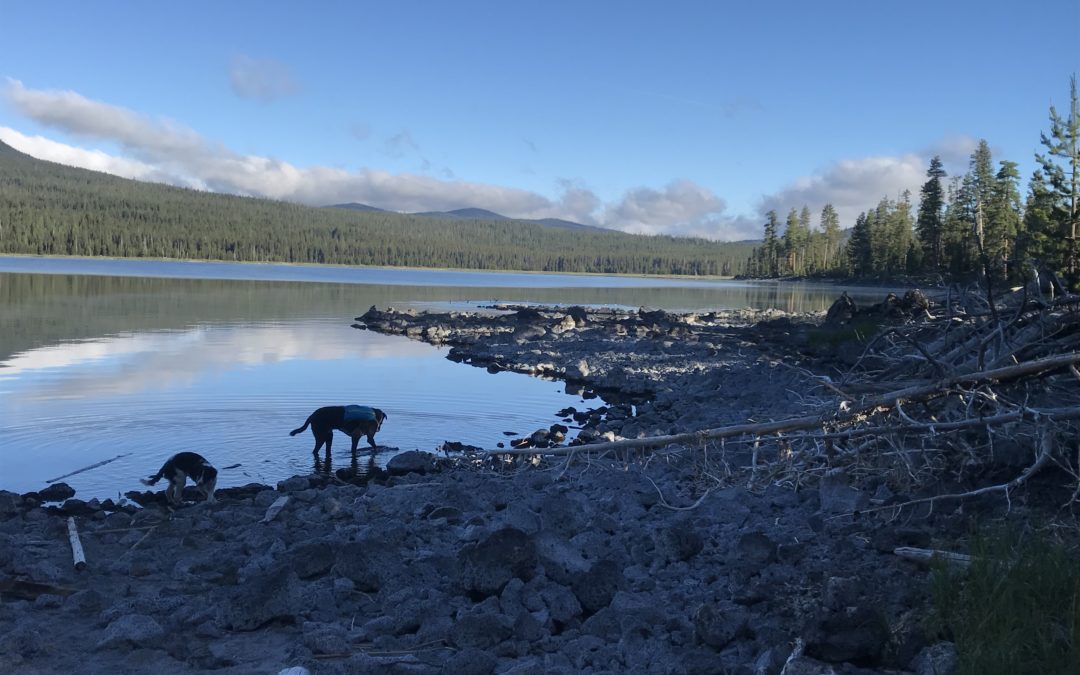 We’ve been making the most of our time in Bend. I wish every day I had the energy I had in my 30s to explore more trails, but I don’t. I should stop wishing that.

Our days are pretty predictable. Wake up with crazed puppy. Make it to the 6:00 CF class. Take dogs out to new trail for a hike or run (or to daycare when Mom needs a mountain bike day). Go by Sparrow Bakery, which has caused me to forget about being gluten free while I’m in Bend. Some things are worth it. Coffee #2 at one of my favorites: Megaphone and Backporch are my current hotspots. Errands, seems like we always need something. Maybe some work. Dog hike number 2. Coffee #3. Back to Alice to clean up from the day and organize for the next!

I say I wish I had more energy, but I am so happy that I have been waking up each day wanting to get out there. It’s nice to feel a bit more like myself again. It seems this road trip is working its magic.

We explored a little further afield this past week. 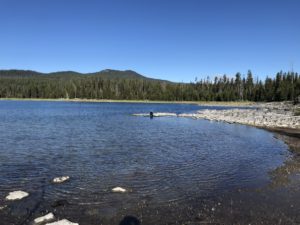 Sunday we were out the door early to drive to Lava Lake, one of the Cascade Lakes. There is a major trail that goes right past the lake and that was our goal. It was a great run(s). The three of us went one way on the trail first; Zoey did 5.5 miles! There were many stops to jump in the lake, which was beautiful. Then we put a tired Zoey in the car and Puck and I headed out the other way for another 3. He wasn’t all that excited about this development until we passed right by Little Lava Lake and he was able to soak for a few minutes on the way out and the way back. The water allows him to forget his suffering!

On Monday I deposited the pups in daycare and went off to explore the Lower Mrazec Trail. It was fun, not technical at all, a smooth climb and fun descent. The only downside was the two miles up a road to get to the trail. People drive it, but it didn’t seem like a good idea to me… When I picked the pups up, we went straight to a dog “park” people had told us about. I thought it was a quick little walk to the river. I ended up walking with a nice guy who had raced the XTERRA in Crested Butte back in the day, so we chatted while we walked. He informed me I had chosen the not-so-direct path to the river, so about 2 miles later, a very hot Puck and Zoey forgave me when we got to a great watering hole with lots of other dogs! We chose the quicker option back, but it was probably still a mile or more. Needless to say, I had two very tired doggies. 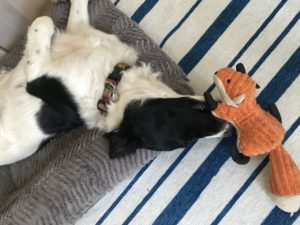 On Tuesday we ventured about 90 minutes away to hike to the Blue Pool. It is along the McKenzie River at a place where the river comes out of the ground and forms a pool. Several people had mentioned it and it looked beautiful. From what I had read and understand you could actually get down to the pool. The hike to it was lovely, we hiked along the river for the first mile and then the trail rose above the river. It was a sheer drop off to the river and I had to be on constant dog alert. We made it to the Blue Pool, which was truly spectacular. But there did not appear to be any logical way down, certainly not with two crazy dogs. I asked the two people who were there and none of us had a solution. Finally we just gave up. My heart had had enough of watching Puck and Zoey go right up to the edge, eager to get to the water! It would be a lovely place to hang out, just not with two hyperactive dogs. I was really glad we had gotten there early; by the time we made it back to the car, there were many hikers on the trail, and the parking area was full. I always have Puck and Zoey off leash – they are surprisingly well behaved when I ask them to be, but it means we have to constantly stop and wait off trail while people and leashed dogs pass by. We prefer our trails to ourselves! 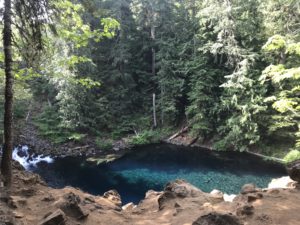 Wednesday we headed up to Sisters (only 30 minutes from Bend) to explore some of the trails there. That was ok, the trails are nice, but nothing special. Been there. Done that. I know there are nicer ones further afield but there are so many options right here that it is not worth it.

Today I had plans to ride. I put the doggies in daycare. Then I realized that I needed a day off. I’m feeling far from spectacular these days, my joints feel like the Tin Man, but today I just felt extra exhausted.  In positive news, my Whoop has been ecstatic with me and I’ve been in the green almost every day, so hopefully my body will respond and I’ll feel something closer to good soon!

Sorry for the detour into a pity party there.

Today I’ve been working and shopping and drinking a LOT of coffee! Tomorrow I will ride. And maybe have a beer. I feel like I’ve been neglecting the breweries, although I suspect they will survive without me.

The kids are doing great. We are spending a lot of quality time together. Zoey and Makoya have come to a truce on bed positioning, which means I usually have Zoey stretched out beside me and Makoya practically on my head. It’s a twin bed. Zoey is 5 months old and already 30 pounds; my allotted sleeping space is diminishing daily.

We are here through the weekend. The weather has been spectacular. It rained for the first time last night, and was a little chillier today, which gave me further excuse to take the day off. But it looks like the rest of our time here will be beautiful.

Monday we’ll pack up and head East onto our next destination(s).