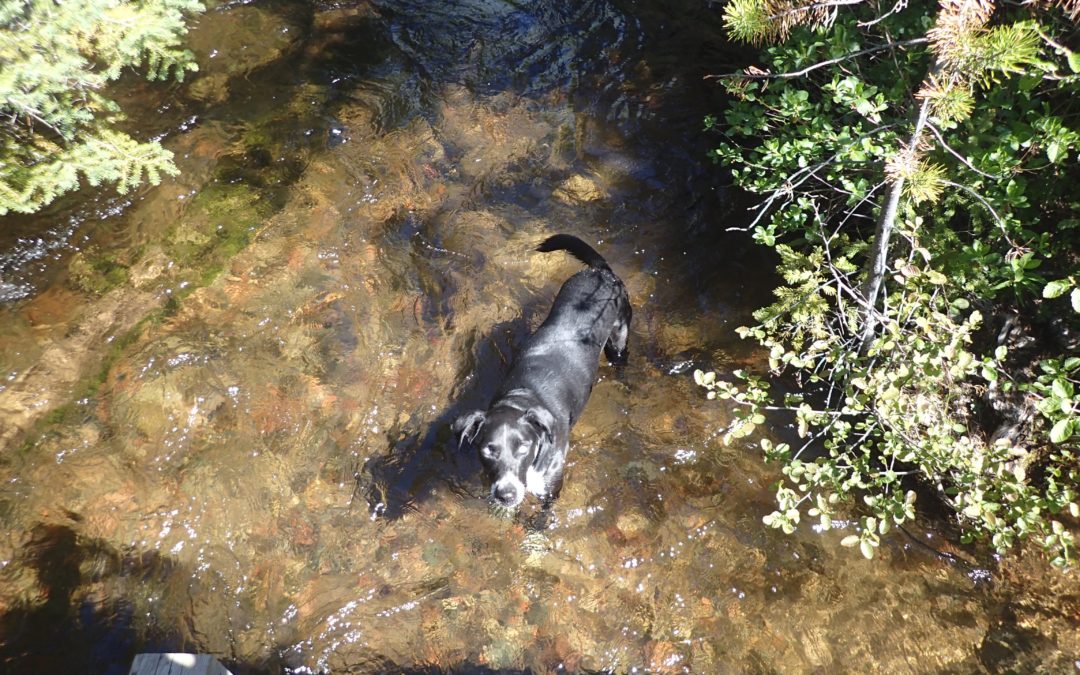 My first experience with Stand Up Paddle boarding (SUP) was on a poorly inflated blow up board on a very cold lake in Colorado. I swam, multiple times and it did not endear me to the sport. Lori, who I met at CrossFit here, inspired me to try again. I had hoped to go with her, but schedules didn’t mesh. So this afternoon, I took out a non-inflatable SUP on the Deschutes River. And I didn’t swim! I actually covered some distance AND had fun. The best thing is that I saw three dogs with their owners on paddleboards. One was a basset hound, SO ADORABLE. He looked a bit confused, but was taking it in stride. Anyone want to take bets on the likelihood I can a) get Puck ON the board and, if yes to a, b) keep both of us on it? Hahahahahaha. Snort. Fall on floor. But the thought crossed my mind to try…

Now, I don’t have any photos to prove I stood up and paddled, I wasn’t willing to risk the camera, but I DID! Fun. Very peaceful.

Sunday we hit the trails early again for another mountain bike ride. I really wanted to do the second loop I had been eying and Sunday was the best day for it. I woke up thinking the last thing I wanted to do was ride my bike, but once I was out there I was happy I did it. Since I don’t know the trails here and I’m not willing to risk having to carry a 90-pound dog when he poops out from heat exhaustion (not a lot of water on these trails), I played it safe and took Puck on an 8 mile out and back before my loop. The day stayed cool, so he would have been fine for the 13 mile loop, but I really WANTED the extra 8 miles on my butt. NOT. Some history: my tried and true seat broke back in April in Fruita. I guess I should cut back on the beer… anyhow, they don’t make that seat anymore so I have a different seat that I haven’t quite dialed in yet. Which means: extra pain in the butt!

The loop was great, with a nice long climb – yay! No great view to go with it – too many trees – but it was still beautiful. The down on Whoops trail wasn’t Tiddlywinks; but it was still pretty fun.

My butt and legs need a few days’ rest from the bike so today we had a leisurely morning. I did the 6:30 CrossFit, then did a short swim in the outdoor pool. After that we headed up to do a hike, supposedly along Tumalo Creek. Sounded promising. It was hot for us. Must have been 65 degrees out. HEAT STROKE.

It turns out Tumalo Creek is what I would consider a raging river that was far below the trail. Oops, need to look at map more closely. Puck attempted to scale the cliff a couple times in desperation – MOM THERE IS WATER DOWN THERE! Fortunately there were enough feeder streams to keep him going. Barely. I was ready to jump in with him by the end! 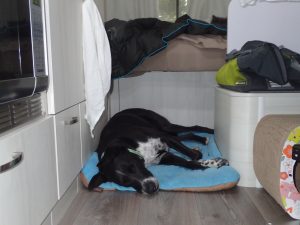 I dropped a pooped Puck back with the kitties, then headed out to try my hand at the SUP. Mission accomplished!!!

The only bummer of the day: I struck out for a second time on my attempt to patronize Crux Fermentation Project. I GUESS I will just have to come back to Bend. Darn it. I was hoping to avoid that. There was plenty of space today at Crux, but the kitchen is closed on Monday and the food trucks didn’t have anything I could eat. And I am not quite to the point where I can survive on beer alone…

So I have deposited myself at Brother Jon’s Public House. A friend of a friend said this is where the locals eat, so I’m having a beer and will report on the food. It has more of a dive sports bar feel, but the beer is good, so I’m happy at the moment!

Tomorrow is our last day in Bend. I will be sad to leave. But I can’t be too sad because we are headed on to Sun Valley, Idaho!!!